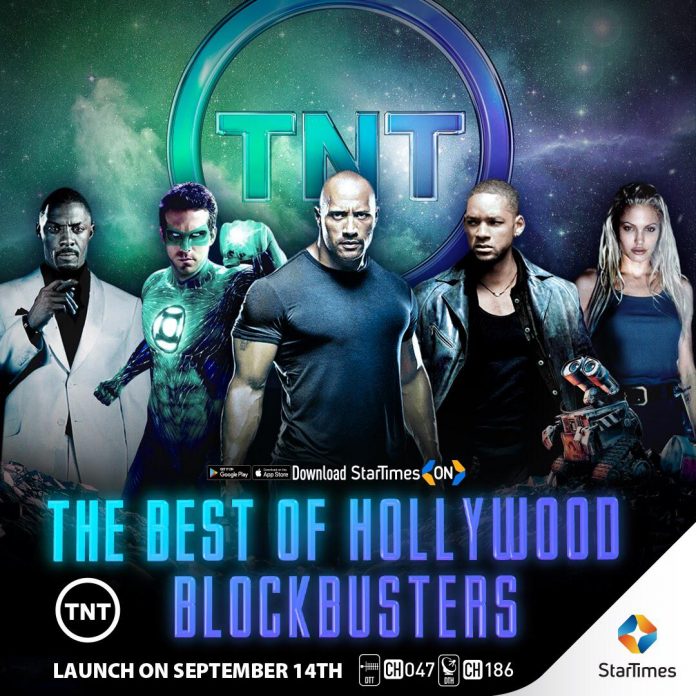 As the 15th of September, StarTimes subscribers in 30+ countries including Cameroon, Ghana, Kenya, Mozambique, Nigeria, Rwanda, South Africa, Tanzania, Uganda, and Zambia will be able to enjoy an action-driven, pulse-raising slate of movies, mixed with romantic gems and hilarious comedy, alongside original TNT productions, aimed at keeping its African audiences glued to their screens!

WarnerMedia has a long-standing relationship with StarTimes in French-speaking African regions distributing Cartoon Network, Boomerang, Boing, WarnerTV, CNN and TCM Cinéma across the continent, and is already distributing TOONAMI, the go-to destination for action and animation movie enthusiasts of all ages, through the first-ever deal with StarTimes in English speaking Africa. This new TNT deal will further diversify its channel offering giving StarTimes’ viewers access to the high-quality blockbuster movie channel tailored for African viewers.

As part of the September launch, TNT has an exciting line-up of never-before-seen titles with the premiere of its latest TNT Original Movie, Human Capital; a Fan Month block dedicated to the best titles of Denzel Washington (Remember the Titans, Déjà vu, The Hurricane and Fallen); and the reoccurring Film Fight stunt, where in September, an original movie will be faced against one of its sequels, every Friday evening, in a double feature, bringing up sagas such as The Transporter, National Treasure, Karate Kid, and Free Willy.

TNT will be available on StarTimes’ DTT Basic Bouquet (channel 047 and 214 in Uganda), and Smart Bouquet on DTH (channel 186), offering the best action, thrills, comedy, original movies and more!

WarnerMedia is a leading media and entertainment company that creates and distributes premium and popular content from a diverse array of talented storytellers and journalists to global audiences through its consumer brands including: HBO, Warner Bros., TNT, TBS, CNN, DC Entertainment, New Line, Cartoon Network, Adult Swim, Turner Classic Movies and others.

Tailormade for African fans, TNT offers the best of contemporary and Hollywood blockbusters, with programming built on an action-driven, pulse-raising slate, mixed with romantic gems and hilarious comedy – just as our African fans like it. TNT is available in 49 English-speaking African countries, through StarTimes’ Basic Bouquet DTT (channel 047 and 214 in Uganda), and Smart Bouquet on DTH (channel 186). The channel reaches 6.7 million South African households every month and offers programming that is relevant and interesting to African fans, with channel premieres of films such as Pearl Harbor, Cinderella Man and the Batman trilogy, as well as brand new TNT Originals such as Escape from Pretoria, Buffaloed and Human Capital.

TNT is a brand by WarnerMedia.

We came back to music because of our fans – Asaase Aban