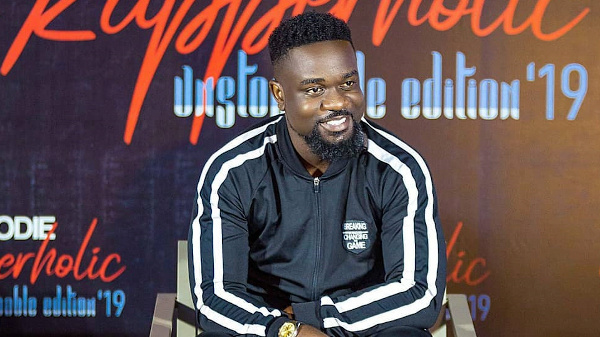 Known in real life as Michael Owusu Addo, award-winning Ghanaian rapper, Sarkodie has disclosed that he never imagined his personal annual headline concert, Rapperholic would become a major show which would attract so many crowds each year.

According to Sarkodie, he never believed his brand appeal at the time could convince people to pay a huge price for them to watch him perform live.

In 2012, Rapper Sarkodie hosted his first Rapperholic concert to promote his album against many odds on December 24, 2012, on the same day and at the same location where the Ghana Movie Awards was being hosted.

Sarkodie said he thought his first concert would flop considering the competition he faced at that time.

Speaking at the launch of this year’s Rapperholic Concert, the Of33tsor hit maker said, “It was Christmas day, people want to spend time with their family, and they don’t want to go out. How are you going to draw 5,000 people to gather just because of you and this is not Ghana Music Awards.”

“On that same day, we had our biggest competition, it was Ghana Movie Awards and this was a well-established brand that we were about to compete with on our first show and the same space. The main conference center and the tent, so the crowd will be coming in and you will be seeing Ghana Movie Awards and Rapperholic, where are you going to attend? Sarkodie asked.

The B.E.T award winner hilariously revealed that he secretly kept asking people while in his hotel if attendance was impressive because he was anxious about the attendance.

“I was there on WhatsApp messaging my sister, anybody I could get hold of and ask, how is it going? They would say it’s not bad. By 8 pm they sent me a video while I was in my hotel waiting and I saw all these people there because of me. Trust me that was very emotional,” he stated.

Sarkodie made his first Rapperholic appearance on a motorbike and since then the Tema-based rapper has gone ahead to host 8 consecutive Rapperholic concerts which have never flopped but have rather become a show music lovers look forward to every December.