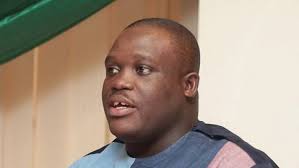 Sam Nartey George, Ningo Prampram MP, has revealed that Prof Aaron Mike Oquaye, the Speaker of Parliament, “lied” when he (Speaker) told the House on Saturday, April 4 that he (Sam George) had said in a letter addressed to him (Speaker) that he was no longer going to attend Parliament because it was a “waste of his time”.

On Monday, Mr George said that he never made that statement in his memo to the letter.

“That is very unprofessional and very poor administrative practice on the part of the Speaker”.

“Even after choosing to exercise such poor judgement, the Speaker goes ahead to then lie and peddle untruths about what I wrote to him”, Mr George said, explaining: “He (Speaker) claims in his closing remarks that I wrote a castigating letter to him telling him that I will no longer come to Parliament because attending Parliament was a waste of my time”.

“Let me put on record, and I’ve responded to the Speaker today [Monday], the Speaker told a lie while speaking in the chair, which is unfortunate; he told a lie on his birthday while presiding over the august House of Parliament where you expect decency and integrity to be the least of the attributes to be exhibited by anybody who sits in that high chair. I never, in my letter, stated that attending Parliament was a waste of time”, Mr George insisted.

Asked what he expected the Speaker with regard to his second memo to him on the matter, the opposition lawmaker said: “I don’t expect anything from him apart from for him to come back and apologise and say that he misrepresented the facts but I know the Speaker, he will not; he will not eat humble pie and do what is right, he will not admit that he lied”.

“… If he’s a man of integrity, when Parliament reconvenes, he should read, in full, my letter to Parliament and show the House wherein I stated that attending Parliament was a waste of my time”, Mr George challenge the Speaker.

In Mr Nartey’s first letter to the Speaker, he said he would be absent from the Chamber until the legislature takes concrete actions to protect lawmakers against the coronavirus and also prioritises COVID-19 discussions on the floor.

Ghana has, so far, recorded two hundred eighty-seven cases of the virus with five deaths.

Most of the cases were imported from countries reeling under its devastation.

The Speaker recently asked some MPs to self-quarantine after returning from trips abroad where the virus had broken.

In his letter, however, the Ningo-Prampram MP said not only was Parliament not showing leadership in discussing measures to deal with the spread of the virus, but also not taking adequate steps to protect MPs against it.

“What I am not prepared to do sir, is to take risk that is needless. I am not prepared to risk exposure to the virus by coming to Parliament every day just to come and work on bills that are of no emergency nature and do not relate to the coronavirus or to come and sit and approve loans and tax waivers for private business interests, many of which are foreign.

“It is my considered belief Rt. Hon Speaker that the august House of Parliament is failing to exercise its truly intended mandate in crisis times like this. I hold the strongest conviction that we are pandering whilst the flames that may engulf the state are being stoked.

“In the past two weeks, the House has met and deliberated on several issues. Top among them is the Imposition of Restrictions Bill 2020 and the granting and approvals of a number of commercial loan agreements. None of these deals with the coronavirus pandemic directly,” he said, adding: “For once, let us have our priorities right”, portions of the letter read.