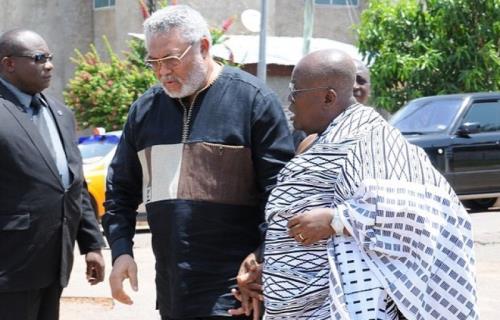 President Nana Addo Dankwa Akufo-Addo has revealed that that the open animosity between the late ex-President Jerry John Rawlings and himself ended in 2012 following his visit to the late leader’s home.

According to President Akufo-Addo, it is no secret that the relationship that existed between the two of them right from the heady days of 1979 through to his brief period in exile, assumption of office as the first President of the Fourth Republic, the historic Kume Preko demonstrations, his period as Attorney General and Minister for Foreign Affairs during the Kufuor administration to his election as the New Patriotic Party(NPP) Presidential candidate was one of open animosity.

President Akufo-Addo added that they did not see eye to eye, however, with time, things changed and they both came to see value in each other and understood to a large degree their respective perspective.

Speaking in a tribute at the State funeral for ex-President Rawlings at the Independence Square in Accra, President Akufo-Addo said that one thing they shared in common was their mutual commitment to public service.

He noted that his visit to Mr Rawlings’ house in 2012, created a strong bond of friendship between them.

“My visit to his Ridge Residence in 2012 signified the easing of tension between us that lasted for the better part of some 8 years. Indeed, when the Ghanaian people in 2016 reposed for the first time their confidence in me in the election of that year, one of the first persons whom I paid a courtesy call was his Excellency, Jerry John Rawlings. From my entry into office right up to the day his maker called him, he remained a good friend a repository of sound advice. I knew that in moments of difficulties in my presidency I could count on his considerable wealth of experience and knowledge. On those occasions, he came through for me,” President Akufo-Addo stated.