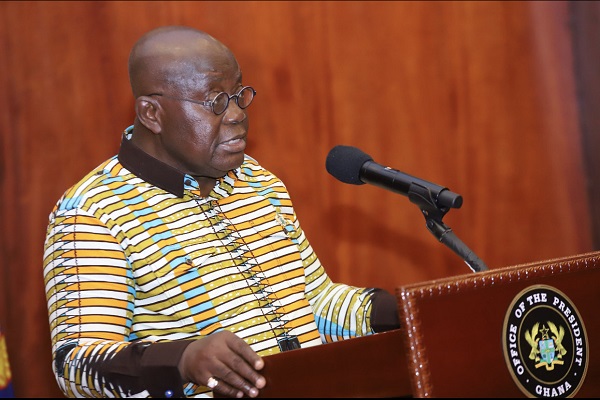 President Akufo-Addo said “Government, through SSNIT, would pay the difference in the lump sum payments, between beneficiaries of PNDC Law 247 and those of Act 766, for those retiring in 2020, with effect from 1st January 2020 to 31st December 2020.”

This was made known by the President on Tuesday, 13th October 2020, when he commissioned the refurbished Hall of Trade Unions of the Trades Union Congress in Accra.

According to President Akufo-Addo, contents of a letter dated 24th August 2020, sent to him by the Secretary-General, on behalf of the TUC, requested his intervention to “correct the injustice and unfairness in the implementation of the three-tier pension system”.

President Akufo-Addo told the gathering that he referred this matter to the Senior Minister, Hon. Yaw Osafo Maafo, who, after careful studies and deliberations, has laid out the position of Government in this matter.

Indeed, 2020 marks the transition year where all public sector workers, retiring under the Three-Tier Pension Scheme, are having their pensions paid under the National Pensions Act, 2008, Act 766.

Even though Act 766 clearly offers higher monthly pensions and better lifetime benefits to workers compared to the erstwhile PNDC Law 247, some workers may receive a lower lump sum (made up of the past credit paid by SSNIT and the Tier-2) compared to that paid under PNDCL 247), with the President adding that “a Committee will be established to supervise the implementation of this decision” to ensure that equity prevails and no pensioner is made worse off.

President Akufo-Addo, touching on the refurbishment, stated that in the run-up to the December 2016 elections, as part of several stakeholder engagements he held, he was at the Hall of Trade Unions, where he interacted with the leadership of the TUC, and outlined his vision for the transformation of the country, if he was elected President of the Republic.
He said “Indeed, the state of the Hall of Trade Unions, at the time of my visit in 2016, and in the early years of my administration, would have made the likes of Pobee Biney, Vidal Quist and their successors very sad.”

Recognising and appreciating the efforts and sacrifices the TUC has made towards the construction of the happy and prosperous Ghana we seek, he stated that “that is why when Government received the request from the leadership of the TUC to assist it refurbish the Hall, we did not hesitate. I have been told by the Minister for Finance that Government’s contribution to this refurbishment was twelve million, seven hundred thousand cedis (GH¢12.7 million)”.

This refurbished Hall, he explained, is a fitting and proper tribute to the memory and work of the leadership of the TUC of yesteryear and today, leaders such as Joe-Fio Meyer, John Tettegah, B.A Bentum, A.M Issifu, A.K. Yankey, Christian Appiah Agyei, Kwasi Adu Amankwah and Kofi Asamoah.

“I am glad to state that the relationship between Government and Organised Labour has been one of cordiality, co-operation and mutual respect. I continue to be reassured by the determination of Organised Labour and its leadership to rally behind Government to create a progressive nation, buoyed on by faster economic growth rates, and driven by the quest for decent jobs,” he said.

President Akufo-Addo further said “I have been heartened by this, and I am determined, for as long as I remain President of the Republic, to continue even more firmly on this path of co-operation and collaboration on which we have embarked to the benefit of the working people of our country”.