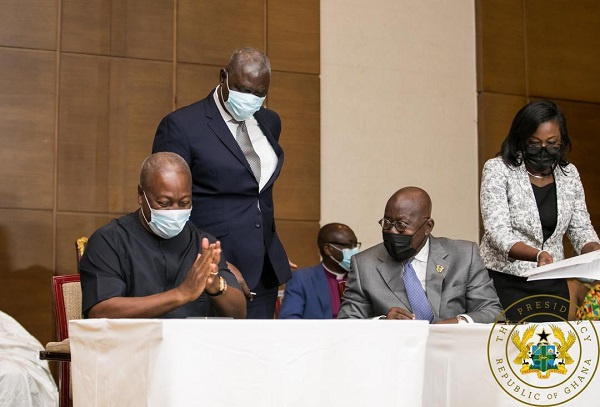 Presidential candidates of Ghana’s two major political parties in the country, the ruling New Patriotic Party (NPP) and the opposition National Democratic Congress (NDC) have signed a peace pact ahead of the December 7 polls.

President Nana Addo Dankwa Akufo-Addo and former President John Dramani Mahama, who are the two, have both committed wholly to maintaining peace during and after the election period.

Spearheaded by the Institute for Democratic Governance (IDEG), the initiative will ensure that the major presidential candidates, by all means, seek constitutional redress if dissatisfied with the electoral process.

John Dramani Mahama, speaking at the peace signing ceremony on December 4, noted his readiness to support the promotion and maintenance of peace throughout electoral process.

He, however, cited some recent cases of violence and voter oppression under the Akufo-Addo-led government as a need to worry about the fortunes of the polls.

he said “Our country stands at a critical juncture of history. Never have the lives of so many depended on the power of a thumb. Now more than ever, we need the institutions of our democracy to work impartially to deliver an outcome that is fair, transparent and in the National Interest… The events of Ayawaso West Wuogon are fresh in our minds. The administration’s refusal to sanction persons involved in assaulting an Honourable Member of Parliament and injuring scores of people remain one of the darkest days in our democratic history.”

Adding; “It is my prayer that despite our deepest fears we shall be proved wrong and Ghana will once again be proven to be the beacon of democracy in Africa. We have done it before, and we can do it again! Let us on Monday exorcize the ghost of Ayawaso West Wuogon. I am John Dramani Mahama and I stand for peace. Let there be peace in Ghana before, during and after the elections.”

President Nana Akufo-Addo on his part expressed hope and optimism in the Electoral Commission (EC) to conduct peaceful polls.

He, whilst committing to the peace, said “The Special Voting process has passed peacefully with all political parties happy with the process…We in the NPP want a credible election conducted in a peaceful and tranquil atmosphere. We’re certain we have the track record that will make Ghanaians vote to renew our mandate.”

“We want this victory to be sweet and incontestable and I’m happy to give my word that we shall accept the verdict of the people of Ghana,” the president pledged.

President Akufo-Addo and John Mahama will on behalf of their political parties work together in ensuring the absolute disbandment of vigilante groups ahead of the elections.