President Akufo-Addo signed the extension of the EI on Monday, September 14.

During his televised address to the nation on Sunday, September 20, 2020, Akufo-Addo said, that wearing masks, properly, will now be in force till Monday, December 14.

“On Monday, 14 September 2020, I extended the Executive Instrument of the mandatory wearing of face masks by three months. So, until December 14, 2020, the wearing of masks remains mandatory. The law enforcement agencies will be required to ensure this directive is respected by all,” he said.

He continued: “It has served us well in the fight against COVID-19, so I urge each and every one of us to wear our mask and do so correctly anytime we leave our homes. This is the new normal requirement of our daily existence until the virus disappears.”

President Akufo-Addo through the Executive Instrument, on June 14, 2020, made the wearing of face masks mandatory in the wake of a sharp rise in the number of COVID-19 cases in Ghana.

It was initially restricted to the Greater Accra, Ashanti, Central and Western regions but later extended to the whole country.

“It is important for me to remind residents of the Greater Accra and Ashanti Regions, where a great majority of cases have been recorded, and in the Western and Central Regions, where we are seeing an increase in infectious cases, to continue to adhere strictly to the social distancing and in-house hygiene protocols announced,” Akufo-Addo had warned during his address on Sunday, June 14.

“With the doctors and scientists telling us that the virus is transmitted from human contact, through talking, singing, coughing and sneezing, which results in sending droplets of the virus from one person to another, residents of these four regions, and, indeed, all Ghanaians, must remember that the wearing of masks is now mandatory.

“Leaving our homes without a face mask or face covering on is an offence. The Police have been instructed to enforce this directive, which is the subject of an Executive Instrument,” the President said as part of his address.

In paragraph 4(2) of E.I. 164 states that any person who fails to comply with the mandatory wearing of nose masks shall be punished in accordance with Section 6 of Act 1012.

Section 6 of Act 1012 reads, “a person who fails to comply with the restrictions imposed under the Executive Instrument issued under subsection 1 of Section 2 commits an offence and is liable on summary conviction to a fine of not less than 1,000 penalty units (GHS12,000) and not more than 5,000 penalty units (GHS 60,000) or to a term of imprisonment not less than four years and not more than 10 years or to both.” 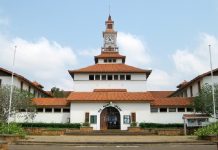 University of Ghana: School assignments will now be marked over 70 per cent 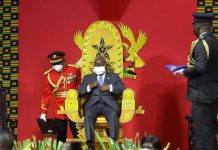 President Akufo-Addo sworn in for his second term 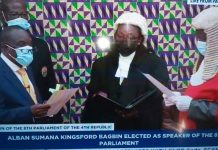