A statement by the presidency has said the Auditor-General, Daniel Domelevo, has been directed by President Nana Addo Dankwa Akufo-Addo to proceed on leave which has accrued to 123 days.

According to the statement signed by Eugene Arhin, the Director of Communications at the Presidency, per the records available, the leave will take effect on Wednesday, July 1, 2020.

Since the appointment of Mr Daniel Domelevo on December 30, 2016, he has taken only 9 days of his annual 132 leave days.

Read the full statement below: 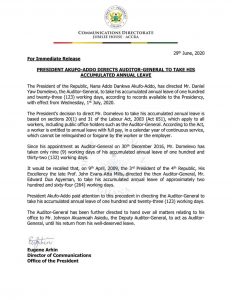