Accoridng to Pastor Mensa Otabil , there is nothing wrong with women wearing trousers designed for women.

Whether or not women can wear trousers has been an age-old  debate among Christians of different denominations.

While others argue  against women wearing trousers and make reference to Deuteronomy 22:5, which states: ‘A woman must not wear men’s clothing, nor a man wear women’s clothing, for the Lord your God detests anyone who does this’, other people are of a contarray view .

Pastor Mensa Otabil , the founder of the International Central Gospel Church (ICGC) , who gave  his view on the subject on Time with Pastor Mensa Otabil in a live Facebook discussion,  said: “What is trousers? I don’t know what the concern is but the concern will be men wearing women’s dress and women wearing men’s clothing which was an Old Testament command about transgenderism – that is – a man presenting himself as a woman and a woman presenting herself as a man and there are people like that”.

“There are men who present themselves as women, they have mannerisms of women and vice-versa; that’s what the passage is about because clothing changes over culture. In the days of Jesus, men did not wear trousers, they wore something close to maxi-skirts but these days, maxi-skirts are for women. So, culture changes and there are pants that are designed for women and it’s women’s clothing. When a woman wears those pants, they are not misrepresenting themselves as men which is what the passage in Deuteronomy is addressing.” 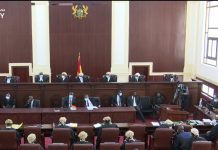