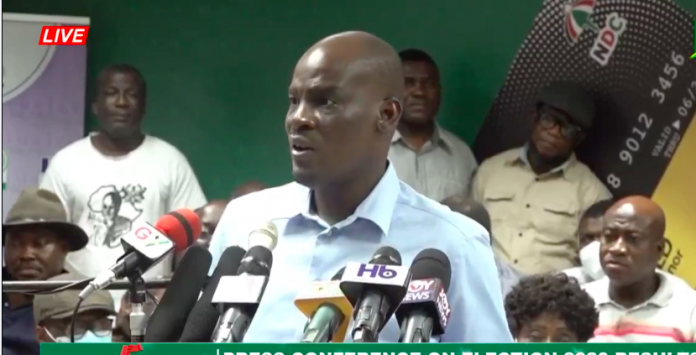 The results of the 2020 presidential elections announced by the Electoral Commission on Wednesday has been rejected by the National Democratic Congress (NDC).

Minority Leader and a leading member of the NDC, Haruna Iddrisu, addressing a press conference moment after the EC Chairperson declared President Nana Akufo-Addo as the winner of the keenly contested election, said the party has overwhelming evidence that proves that the party’s candidate, John Dramani Mahama won the election.

The NDC said “As a party, we have had extensive consultations and detailed analysis of the outcome of the elections as announced by Jean Mensa, the EC chair…We have come to only one irresistible conclusion, that it is a flawed discredited election and therefore we reject the presidential result without any reservation.”

However, Mr Iddrisu said the NDC believe that there are attempts to rob the party of both their presidential and parliamentary victory.

He revealed that John Mahama had written a petition to the EC before the results were announced to voice his concerns over the collation.

“That (petition) was treated with utmost contempt and that we consider unacceptable. We also want to serve notice that the blatant effort even to deny us a parliamentary majority will be fiercely resisted…this evening Ghana’s democracy has come under severe attack and needs some rescue urgently.”

“If not rescued these attacks will foster and grow into future elections and that will disfigure our track record, as a true democratic nation,” he added