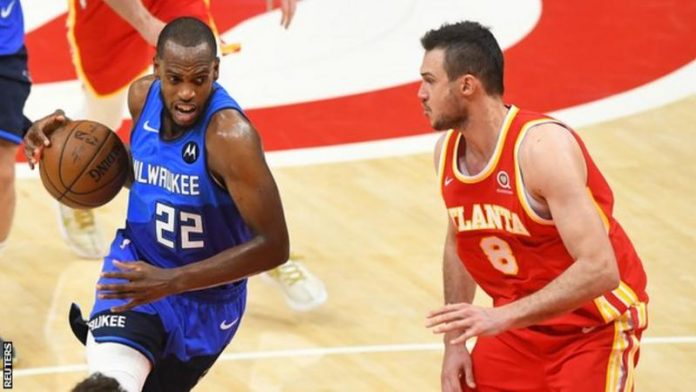 Giannis Antetokounmpo and Khris Middleton scored a combined 71 points as the Milwaukee Bucks fought back to beat the Atlanta Hawks 113-102 in game three of the Eastern Conference finals.

Middleton scored 20 of his game-high 38 points in the fourth quarter.

Antetokounmpo contributed 33 points and 11 rebounds as the Bucks prevailed in Atlanta to take a 2-1 series lead.

“What I saw today was unbelievable. It was greatness,” Antetokounmpo said of Middleton.

The Hawks made a strong start and led by 15 points in the first quarter.

Two-time NBA Most Valuable Player Antetokounmpo was instrumental in Milwaukee’s comeback, scoring 11 of his points in the second quarter to help tie the game 56-56 at half-time.

The Bucks had to wait until late in the third to take the lead, with a lay up from Bobby Portis edging the visitors ahead 82-80.

Middleton’s scoring blitz in the last quarter proved decisive as Milwaukee finished with a 25-7 scoring run to seal victory.

Trae Young led the Hawks scoring with 35 points, while Danilo Gallinari came off the bench to score 18 in the defeat.

The teams will remain in Atlanta for game four of the best-of-seven series on Tuesday.