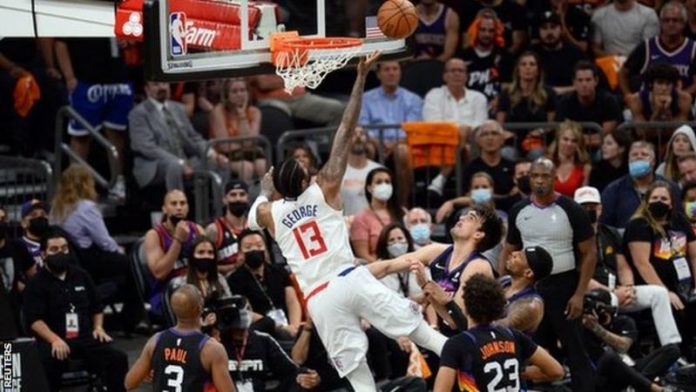 The Suns were hoping to clinch series victory on home soil but the 116-102 win for the Clippers leaves the best-of-seven series poised at 3-2.

The Clippers can level the series with victory in Los Angeles on Wednesday.

“We fight, we’re scrappy, we leave everything on the line and we do it together,” said George

“That’s the most important thing – we do it together.”

The win marked the third time during this season’s play-offs that the Clippers have won an elimination game, and Monday’s win came without several starters, including the injured Kawhi Leonard.

George led the way with 20 of his points coming in the third quarter to take the game away from Phoenix. He finished 15-from-20 from the floor with three three-pointers, 13 rebounds and six assists.

Reggie Jackson supported him with 23 points while Marcus Morris added 22 with DeMarcus Cousins on 15.

“I keep saying this group is resilient, but this group really is. We’re a good team no matter who’s on the floor. Now we’ve got to do it again two more times.”

“It was pretty obvious that we can’t play with a ‘show up’ mentality,” he said.

“We showed up in the first quarter, and they played with desperation. The desperation has to be there. You can’t just show up and expect them to give it to you.”