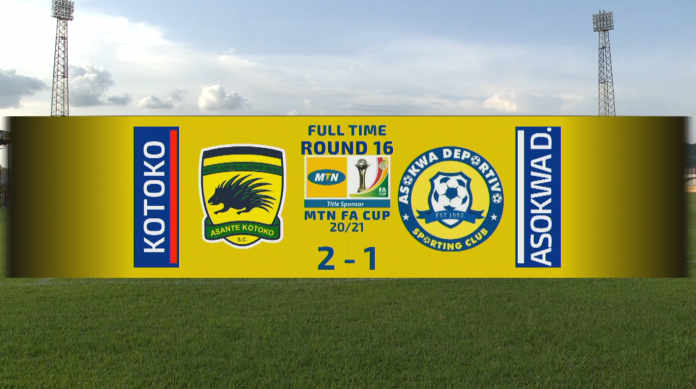 Kumasi Asante Kotoko beat Division One side Asokwa Deportivo 2-1 in the Round of 16 of the MTN FA Cup.

The game which was played at the Obuasi Len Clay Stadium saw the Porcupine Warriors hit the ground running in the 12th minute.

Fabio Gama stepped up and calmly slotted home after Andy Kumi was fouled in the box.

Evans Adomako who has been in great form in the FA Cup made it 2-0 in the 37th minute.

The first half ended 2-0 in favour of Kotoko.

After the break, Asokwa Deportivo reduced the deficit after some good team play saw Asamoah Boateng hit the ball past Abalora.

There were no more goals scored and Kotoko have qualified to the quarter finals of the competition.