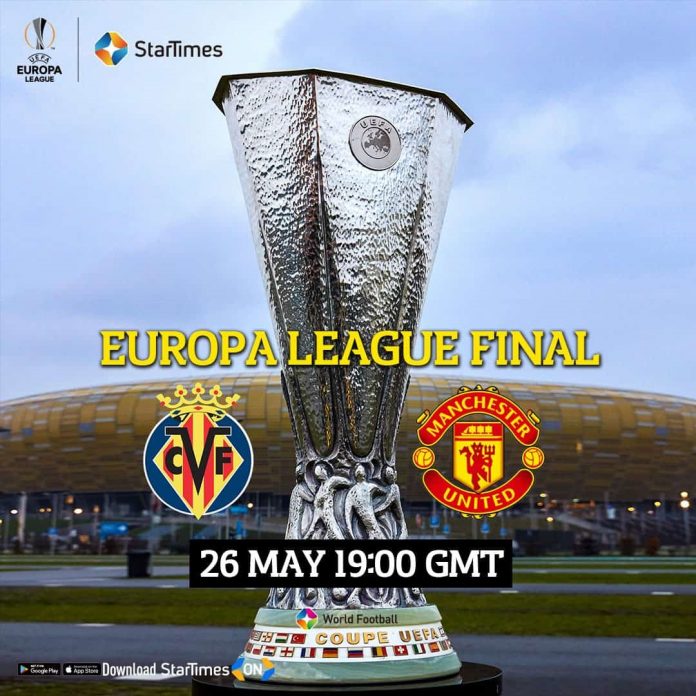 The UEFA Europa League final takes place on May 26 with Villarreal taking on Manchester United. Paul Pogba and Marcus Rashford were already part of Manchester squad for their triumphant Europa League 2017 final against Ajax. This year, against Villarreal, who beat Arsenal 2-1 on aggregate to reach the final, they will face strong opposition. The top-flight match will be showed exclusively on StarTimes.

When Manchester United face La Liga club Villarreal on Wednesday in the Polish city of Gdańsk in the Europa League final, it will be as much a showdown between the coaches, as it will be between the teams.

On the one side, you have Norwegian Ole Gunnar Solskjær, whose position at Manchester United was not at all guaranteed a few months ago.

But an excellent Europa League cup run and fine form in the league that saw the Reds finish second behind local rival Manchester City, has given him as much job security as there is in top class professional football.

The 48-year-old is now looking at his first major success as a manager, having won the league and cup with Norwegian club Molde at the start of his managerial career.

Unai Emery’s career, has been just about the opposite to Solskjær’s. While the Norwegian enjoyed a very successful career as a player with United, Emery was little more than bit-player, mainly in the lower Spanish leagues.

But despite being just a year older than his United counterpart, he has enjoyed tremendous success as a coach – much of it coming in the Europa League.

The former midfielder won a hat-trick of Europa League titles with Sevilla starting in 2014, then won just about everything there is to win in France with PSG before moving on to Arsenal and took them to the Europa League final in 2019.

Solskjær rang in the changes for United’s last league game on Sunday, which they won 2-1 at Wolves, with presumably less than a handful of players being in contention for a place in the final.

Amongst the players rested were Bruno Fernandes, Marcus Rashford and Aaron Wan-Bissaka.

Villarreal, on the other hand, who lost 2-1 at Real Madrid on Saturday, started with a majority of players who are expected to do duty on Wednesday.

Emery will be without Super Eagles midfielder Samuel Chukwueze, who is out with a hip injury, but can count on Spanish internationals Gerard, who is the clubs’ top scorer this season and defender Pau Torres.

They are three of just five international players Villarreal have on their books, compared to 18 United have.

It is thus not surprising that United are considered the favourites, with experienced Villarreal defender Paul Albiol saying he is expecting an exciting match.

“The physical and emotional part will play an important role. We need to be strong during the game. A lot of things happen in the games and we need to be ready for everything.

“Because of their history and because of their squad, Manchester United are the favourites ahead of the final. They’re a giant in the football world. This is the first final we are going to play in. We know what our strengths are and the only way we can win is by being at our best.”

While United have appeared in seven European finals, it is a first for the La Liga team, but Spanish clubs have the advantage against English clubs, having won the last nine finals (including the European Super Cup) between the two countries.

The last time an English club won against Spanish opposition in a final was in 2001, when Liverpool beat Alavés in the Europa League’s precursor, the UEFA Cup.

Millions of football fans throughout the world will be keen to see if Manchester United can emulate Liverpool’s success on Wednesday and Ghanaian fans need not miss out as the game is being shown live and exclusively on the StarTimes football channels. And starting from June 11th, StarTimes is to broadcast all matches of the UEFA Euro 2020 live and in HD.