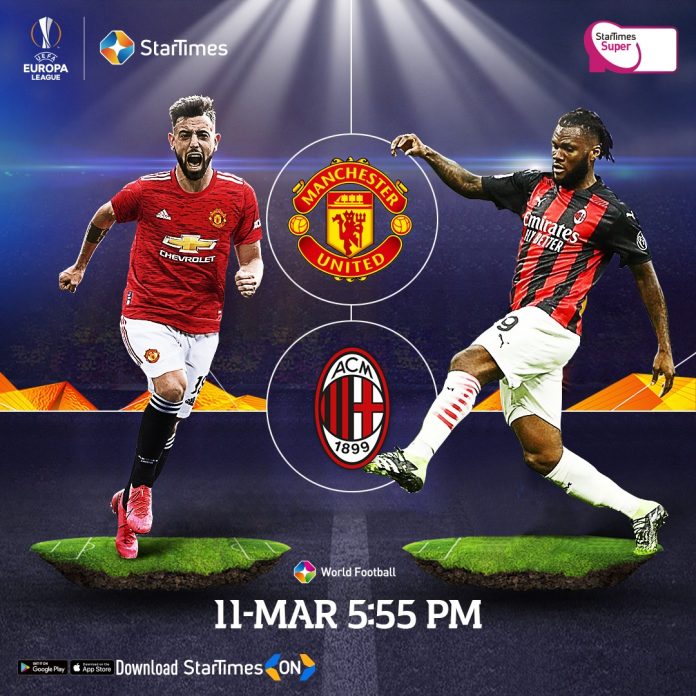 Things are getting tense in UEFA Europa League as round of 16 first leg is being played this week. English Premier League Manchester United will face Serie A AC Milan. Marcus Rashford’s team go into the match against Zlatan Ibrahimovic’s on the back of a clear victory last weekend in the Manchester derby.

Any match between AC Milan and Manchester United in a European competition is worthy of a final.

But when the two meet on Thursday in the Old Trafford stadium in Manchester, what will be at stake is not another cup for their already well-filled trophy cabinets.

What the winner of the two-legged tie will get, is a place in the quarter-finals of the Europa League.

And Manchester United, who have six European titles under their belt, including the Europa League in 2017, go into the game on the back of a huge 2-0 victory against city rival Manchester City on Sunday.

The Red’s opening goal was scored from the penalty spot by Portuguese international Bruno Fernandes, who, before the game, dismissed criticism that he failed to perform in big games.

“Football is in the moment. Some people have said I’m playing bad, and that I have to do better. But for me, it’s OK. I can have that pressure on my back.

“I am sure in some moments, I will score, I will assist and I will perform. And that will help my team-mates to win the game.”

Like United, Tottenham Hotspur ensured a solid victory on the weekend.

Jose Mourinho saw his side beat Crystal Palace 4-1 on Sunday, to move back in contention for a top-four finish.

Mourinho though, insisted that they were fully focused on the Europa League. “I don’t forget the Europa League, I refuse to forget. I refuse just to say Thursday is not important because for me is important. The cup final is there waiting for us but still a couple of months.”

The Portuguese coach will be hoping that his attacking line-up of Gareth Bale, Harry Kane and Son Heung-Min continue their fine form. Kane scored two against Palace and provided two assists, Bale score the other two, with the South Korean international providing an assist.

Spurs are at home in their first leg match against Dinamo Zagreb.

The third English team remaining in the competition, Pierre-Emerick Aubameyang’s Arsenal, saw their first leg match against Greek club Olympiacos moved to Athens as UEFA regulations state that no two clubs should play home games in the same city on the same day.

Although UEFA prioritised Arsenal, coach Mikel Arteta is unhappy with the decision, especially as his side will be facing Spurs in a league match on the weekend.

He said that the decision will give Spurs an edge in the league game. “It does, but unfortunately it’s not going to change.”

Arteta’s Olympiacos counterpart, Pedro Martins, is sweating over the availability of his central defenders after Senegalese international Ousseynou Ba had to be substituted in the side’s 3-0 victory against Lamia on Sunday.

Ba had taken over one of the central defender positions in the absence of Ruben Semedo and Avraam Papadopoulos – neither of whom will be available against the Gunners.

Should the Senegalese not be available on Thursday, the only recognised central defender available for the Greek side would be former Gunner’s defender Sokratis.

Ghanaian football fans will be able to watch these exciting fixtures as Africa’s leading digital-TV operator, StarTimes will be broadcasting the competition live and exclusively throughout the continent on their football channels. And in less than 100 days now, StarTimes is going to broadcast the long awaited UEFA Euro 2020 in HD.