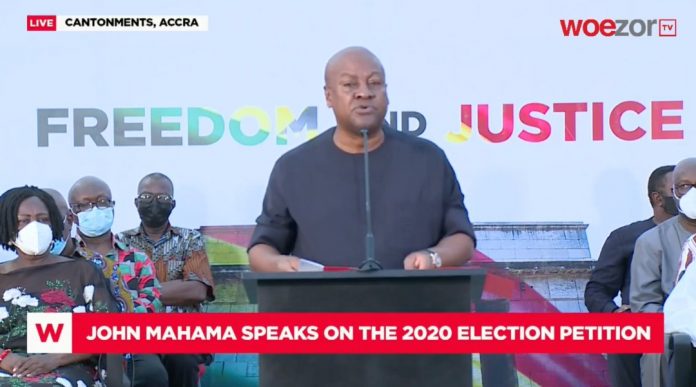 John Dramani Mahama, the petitioner in the just ended 2020 Election Petition, has sent words of encouragement to members of the opposition National Democratic Congress (NDC) after the Supreme Court’s ruling which dismissed his case.

Read by Chief Justice Anin Yeboah, the ruling stated that “the petitioner did not demonstrate how the alleged errors affected the validity of the declaration on the 9th. The petitioner has not produced any evidence . . . we have therefore no reason to order a re-run, we accordingly dismiss the petition.”

Former President John Mahama, speaking at a press conference after the ruling, urged his supporters not to “lose hope or despair”

He said “I am very much aware that there are millions watching and listening to me who are disappointed at the outcome of this case. For those millions, like myself, who held out hope that our democracy would be advanced by the process and outcome of this petition, you must be disappointed. But I encourage you to hold your heads up high and channel your disappointment into hard work that will ensure that, come next election, we will achieve a truly transparent and fair election, which we all as Ghanaians can be proud of.”

Adding, “to the millions of NDC supporters who have stood by me, my running mate, Professor Naana Jane Opoku Agyemang, our National Chairman, General Secretary, Campaign Chairman, FEC, NEC, Parliamentary Candidates, Sponsors and all activists and supporters who gave their all in the hope that we will win and form the next government to save our nation and meet your aspirations, do not despair at this outcome.

I repeat. Do not despair! Never, ever lose hope. The NDC will survive and grow from strength to strength. The sun may have set on our hopes for the just ended election today, but it will rise tomorrow and illuminate our path to a better outcome next time around”.