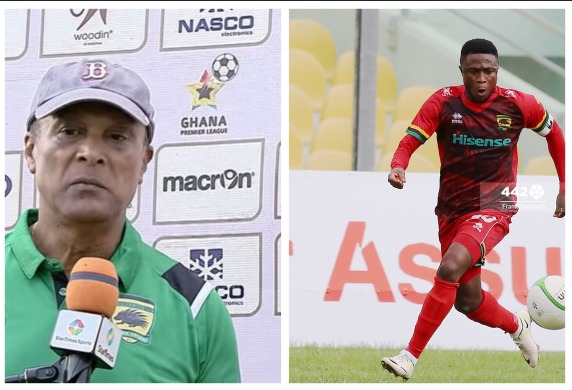 Asante Kotoko forward Emmanuel Gyamfi and Coach Mariano Barreto have both been hit with match bans by the GFA Disciplinary Committee.

The said player according to the GFA Disciplinary Committee on June 14 during the match between Inter Allies and Kotoko at the Theatre of Dreams stamped on Inter Allies’ Andy Okpe in an off-the-ball incident around the 65th minute.

The GFA said, the actions of Gyamfi is improper and likely to bring the game into disrepute.

After Gyamfi faced the Disciplinary Committee, the body has come found with its sanctions.

The Asante Kotoko deputy captain has been slapped with a one-match ban, and further handed a GHC1000 fine.

Meanwhile, the Porcupines head coach Mariano Barreto has also been suspended for two matches and fined GHC3,000 for his verbal offensive statements about the performance of the referees in their match against Legon Cities.

According to the Portuguese trainer, Kotoko played 11 against 15 in the said match.