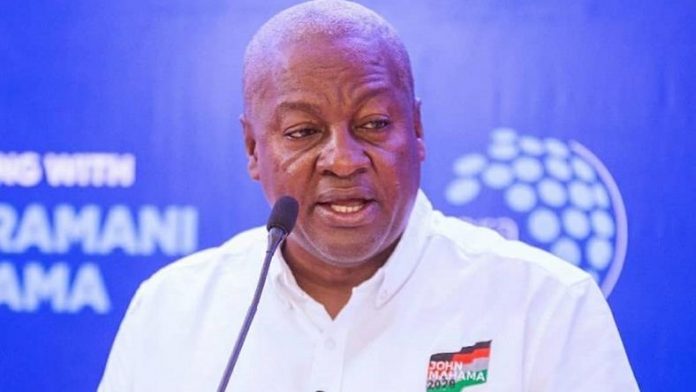 John Mahama, the Flagbearer of the opposition National Democratic Congress(NDC) , has said he’ll accept the results of the 2020 presidential election if the Electoral Commission conducts an independent audit of the results.

Mr. Mahama and his party have rejected the results of the December 7 polls describing the election as flawed.

According to John Mahama and the NDC, their analysis of the pink sheets available to them shows clearly that Mr. Mahama won the elections.

Mr. Mahama, in an interview with Voice of America(VOA), showed a just cause for the NDC’s position, adding that the issues raised cannot be swept under the carpet.

“We are currently doing a forensic audit of all the constituencies first to establish what happened and then confirm the figures that we have. Because this case might end up in court…I don’t know, I cannot mention anything for now but we are doing an audit and based on that we’ll take whatever decision we need to take.

“But I think that in the interest of the more than 6million people who voted for me, I must uphold our democracy and hold the Electoral Commission to a higher standard and hold this government to a higher standard in terms of our democracy. The way President Akufo Addo and the EC have conducted this election is a dent on our democratic credentials as a government. And so with my principles as a democrat, I can’t be seen to be sweeping it under the carpet and letting it go.”

Ex-President Mahama added: “I think that we must bring closure to this by seeing exactly where the issues are. If an independent audit is done by the EC, they’ll bring somebody in to crunch the numbers do an independent audit why not, I’ll be the first person to concede and walk away. But as long as that is not done and I know that there was a deliberate attempt to subvert the will of the people in favor of the incumbent it will be wrong for me in terms of our democratic practices to just leave it because we’ll not learn the lessons of this election. I think we must learn the lessons of this election so that we don’t repeat it in future one.”