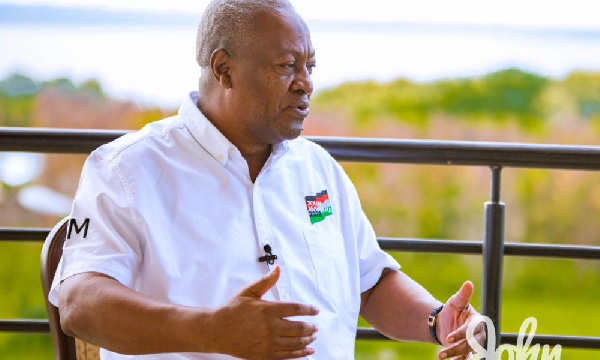 John Mahama, the flagbearer of the opposition National Democratic Congress(NDC), has slammed the Akufo Addo led government saying its many unfulfilled promises have caused Ghanaians belief in the democratic system to be shaken.

According to John Mahama, the government has created the impression that for politics one can just lie to the people for political power just to come and do otherwise.

Mr Mahama, in an interview, said “But what it does is that it diminishes the faith our people have in the democratic system. You would have noticed that until recently, a lot of people if you ask them in most of the opinion polls that have been done if you look at it comparatively from Rawlings, Kufuor, Mills, my time, the number of people who said they won’t vote was minimal. Since Akufo Addo came to power the number of people who say they won’t vote has risen because they believe that politicians are taking them for a ride and so they extend it to the whole political class but they don’t realize that it is a particular administration that made promises they know they cannot achieve.”

He added: “When they were making the promises I said it that knowing the nature of the economy they(promises) were not immediately achievable. We have to move gradually to be able to attain that level but we haven’t reached there yet.