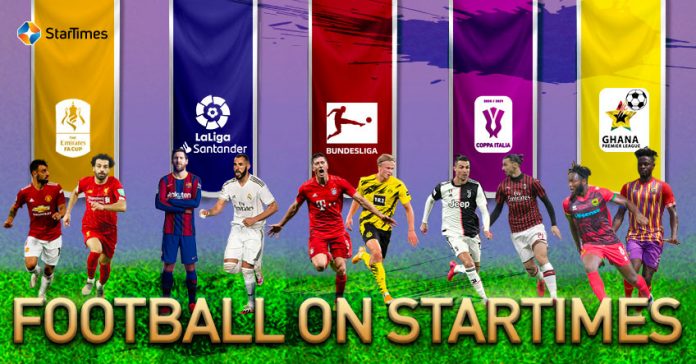 This January, StarTimes is all about football.

The year 2021 is beginning on a high note on StarTimes as the leading digital TV broadcaster will air events from Ghana and all over Europe; Spain, Germany, Italy and England.

Ghanaian football fans will have a lot to cherish this January and beyond as the Ghana Premier League warms up into a more intense stage with great games to look forward to.

Bechem United having led the pack and unbeaten till match day 6, fell heavily 6-1 in week 7 to a resurgent Hearts of Oak who will be looking forward to entertain their fans to more intriguing matches. Kotoko would love to keep tabs on their rivals as they demand a success story this year.

StarTimes will keep Ghanaian fans thrilled with every action from the Ghana Premier League.

English football fans will also be delighted to start the year with two rounds of The Emirates FA Cup. Third and fourth rounds will be played from 8th and 22nd January respectively. As EPL clubs enter the competition, there will be tough clashes between Aston Villa and Liverpool, Wolves and Crystal Palace, while cup holders Arsenal, Manchester United or Leicester were more favored by the draw.

“The League to follow” the German Bundesliga, back on StarTimes from a short winter break. With five match days from 10th January until the end of the month, expect lot of goals and actions in the German league. Bayern is leading the league, closely followed by Leipzig, Leverkusen and Dortmund. Will the Champion’s League titleholder remain on top? A lot can happen in January.

Before that, Coppa Italia round of 16 will take place from 12th to 21st January. Serie A leader A.C. Milan, Inter Milan, Roma and others top Italian clubs will compete to get qualified for the quarter-finals played around 27th January.

It will be the second straight edition of the Spanish Supercup to be played under the new format with four teams: 2019/20 La Liga champions Real Madrid, 2019/20 La Liga runners-up Barcelona, 2019/20 Copa del Rey finalists Athletic Bilbao and Real Sociedad. On 13th January, Real Sociedad will face FC Barcelona while the following day, it will be Real Madrid and Athletic Bilbao’s turn. The semi-finals winners will clash on 17th January in Seville.

Copa del Rey will enter its round of 32 on 16th January, followed by the round of 16 on 27th. Then early February it will be time for quarter-finals. From 32 teams to four teams in less than a month, football fans can expect great battles in Spain.

January will be intense for Spanish clubs that in the meantime still have five La Liga match days to play until the end of the month. Given they haven’t had a rest during Christmas, January will be a real test for La Liga players. And it will be the opportunity to make the break for Messi and proves he is still La Liga’s number one.

Matches will be broadcast live and in HD on StarTimes Sports channels.