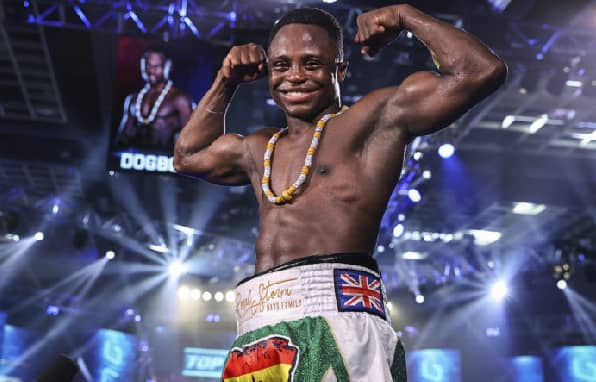 Following his defeats to Emmanuel Navarrette, the Ghanaian boxer switched trainers from his father(Peter) to the Washington DC based Barry Hunter.

Adam Lopez the California skilled fighter, poses threat of how he can box and qualities of strong jab. Hoping to prove doubters wrong against the Ghanaian in their 10 round featherweight contest

Dogbe was composed and started well in the early rounds. Being able to box Lopez and landing jabs with combination of hooks.

However, the Ghanaian was stunned with an uppercut from his opponent in the third round which was due to a defensive flaw Dogboe committed.

Lopez began to increase his punch rate and pour pressure on Dogboe in the middle rounds. Dogboe was clever to switch his tactics and stance. One moment he switch to Southpaw, the next moment he switch to his Orthodox to connect with hooks and uppercuts. That was good conditioning on the part of Dogboe.

In the last rounds, the Ghanaian began to show signs of fatique which could be as a result of his early explosive rounds.
The final round saw both men fight their hearts out by trading vicious shots that had the crowd on their feet.

In the end, the judges scored the fight in favour of Dogboe in a majority decision ( 95-95, 97-93, 96-94) in an entertaining bout. The Ghanaian fighter’s redemption continues as he records his second victory after he lost his title to Navaratte in December 2018.