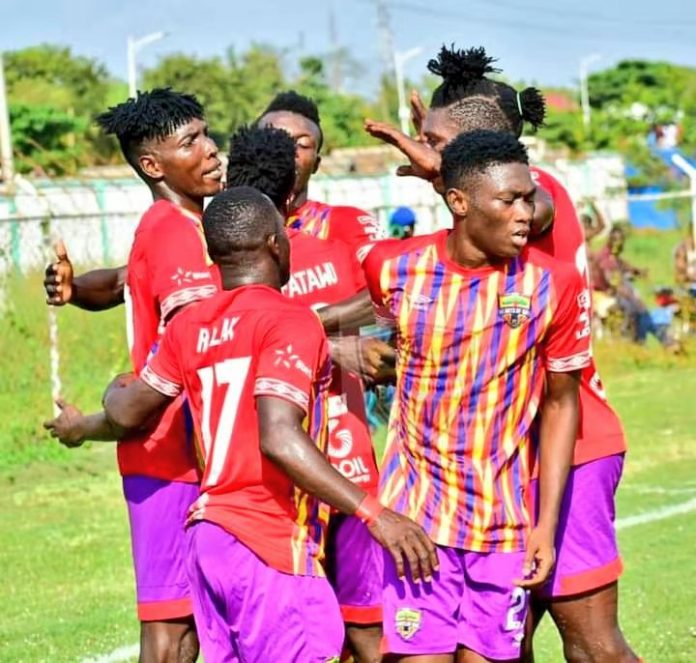 Hearts of Oak humiliated league leaders Bechem United in a matchday 7 game of the Ghana Premier League (GPL) at the Accra Sports Stadium.

Bechem until the game were unbeaten in six games and were one of the inform teams in the GPL this season.

Hearts should have been ahead in the 32nd minute but Daniel Afriyie fluffed his lines when he was presented with a glorious opportunity.

However, Bechem were reduced to ten men when Emmanuel Asante was sent off in the 38th minute for dissent but the first half ended 0-0.

After the recess, the Phobians got into their stride and made their man advantage count.

Abdul Manaf Umar put them ahead in the 52nd minute and former Samatex forward Victor Aidoo came from the bench to make it 2-0 in the 60th minute.

Aidoo got his second and Hearts’ 3rd in the 73rd minute.

The Phobians under Kosta Papic have shown great attacking prowess and they pushed for more goals and were awarded a penalty in the 84th minute after Afriyie was brought down.

Frederick Ansah Botchway stepped up and made no mistake from the spot to make it 4-0.

Prince Kwabena Adu reduced the deficit in the 86th minute but Lawali Mamane made it 5-1 for Hearts just two minutes later.

Substitute Benjamin Afutu scored the final goal of the game in the 90th minute and Hearts eventually won 6-1.

The win puts Hearts second on the table with 11 points just 3 behind Bechem United who are on top.