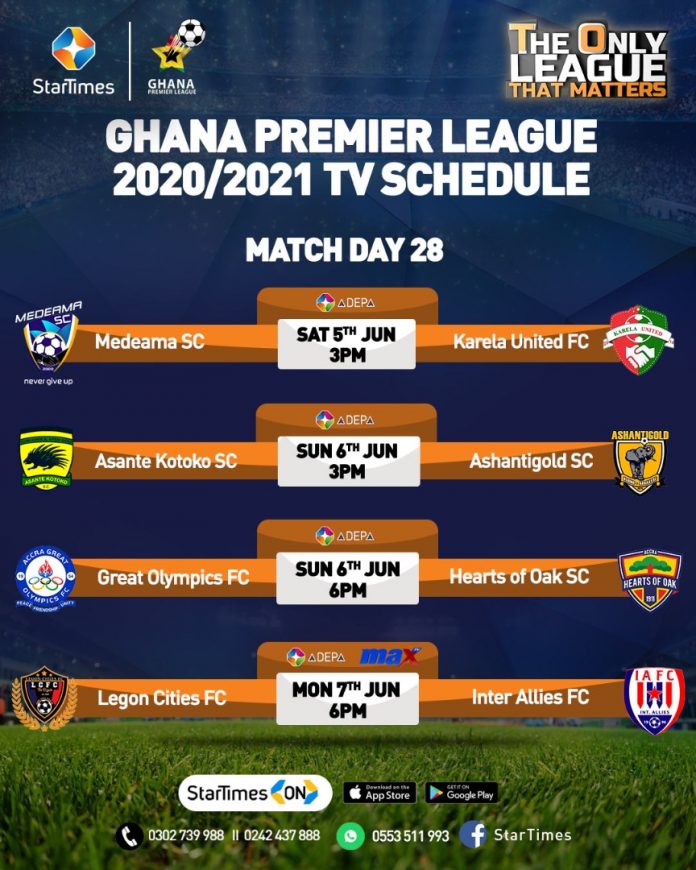 Week 28 matches of the Ghana Premier League will be honored across all league centers.

The games which start on Saturday will see the Mantse Derby where Hearts of Oak will play Great Olympics and Kotoko will also face off with AshantiGold in the Ashanti derby.

It is a battle between 4th and 5th on the table as Medeama host Karela in the Nzema Derby.

This match at Akoon Park is expected to be a cagey encounter as both teams are currently on 43 points.

Both will go into the game with the aim of snatching all three points to increase their chances of challenging for the league.

Kotoko have drawn their last three matches and will be facing AshantiGold at the Obuasi Len Clay Stadium.

The Asanti Derby will produce lots of excitement. Kotoko needs the points to close the gap between themselves and Hearts of Oak.

AshantiGold who sits 10th also needs maximum points to move into the top half of the table.

Berekum Chelsea have won once in their last five games and at the Golden City Park, they will want a win to impress their fans.

For King Faisal, it is about survival, though out of the relegation zone, they are still hovering around the danger area and sit 15th.

Dreams FC will play host to Elmina Sharks at the Dawu Theatre of Dreams. The Still Believe boys lie 7th and three points could move them into the top 4.

Elmina Sharks will need to up their game to get anything from the match as they are winless in their last 5 games.

Dwarfs are currently 17th on the table and lie in the relegation zone and a win could lift them out of the zone.

They were deducted 3 points but will have to do more to survive. They host Aduana Stars who recorded an impressive draw against Kotoko in Week 27.

Eleven snatched a last minute winner against King Faisal last week and will look to continue that form against Bechem United.

They host Bechem United at Techiman, Bechem have not won a single game in their last five matches.

Relegation bound Liberty Professionals will play WAFA at the Sogakope the home of the latter.

Liberty Professionals need all three points to move them out of the relegation zone.

For WAFA they have an opportunity to move into the top four with a win. They are currently 6th on the table with 42 points.

8. Great Olympics vs Hearts of Oak

The biggest game of the weekend, the Mantse derby will be played on Sunday at the Accra Sports Stadium.

Hearts of Oak are in search of their sixth consecutive win in the season after winning a record 5 straight games.

Great Olympics are just five points behind Hearts and they have vowed to beat the Phobia boys.

Legon Cities have recorded four wins in their last five games and are currently safe from the relegation zone.

For Inter Allies, they are last on the table and the best results for them is nothing but a win.