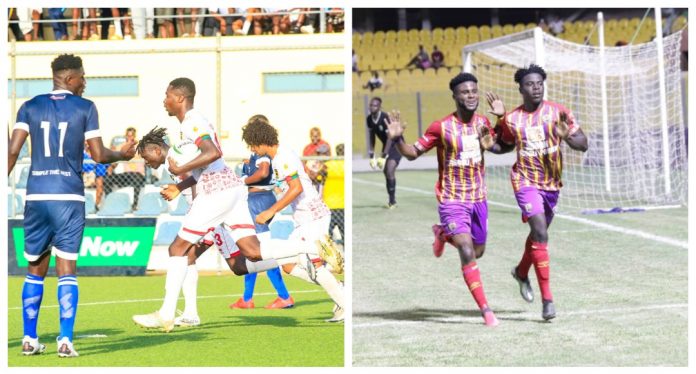 Week 25 games of the Ghana Premier League (GPL)  were played across several venues with Hearts of Oak and Aduana Stars all picking up wins.

A 31st-minute strike from Justus Torsutsey was enough to hand the Sogoakope based club all three points.

One of the games for the week, relegation-threatened side Liberty hosted Kotoko at the Sogakope Red Bull Arena.

Former Kotoko midfielder Evans Owusu surprised Razak Abalora in goal as Liberty went one up in the 36th minute.

They looked like they were going to snatch all three points but Ismail Ganiu scored a powerful header in the 83rd minute to draw them level.

King Faisal managed to beat Bechem United 3-1 to move out of the relegation zone.

Two quick goals from Zubairu Ibrahim and one from Kwame Peprah were enough to hand them victory and lift them out of the relegation zone.

One of the surprising results from the weekend. Bottom of the table side Inter Allies thumped Berekum Chelsea at Dawu.

Two quick goals from Alex Aso and second-half strikes from Samuel Armah, Richmond Lamptey, and Nafui were enough for Inter Allies to record their biggest win of the season.

A 54th-minute penalty from Stephen Banahene was all AshantiGold needed to hamper Great Olympics’ chances of winning the league.

Aduana Stars continued from where they left off last week against Great Olympics with an impressive 2-0 win over Medeama.

Two first-half goals from Samuel Bioh and Sam Adams gave the Dormaa based side all three points.

A game full of drama, first Hearts were awarded a penalty which Victor Aidoo missed in the dying embers of the game.

With Sharks reduced to 10 men, Hearts took advantage in the second half and pilled pressure on them. Sharks goalkeeper Laud Bawa made a mistake and Hearts took the lead through Isaac Mensah.

They got a second late in the game when Benjamin Afutu powered in a header.