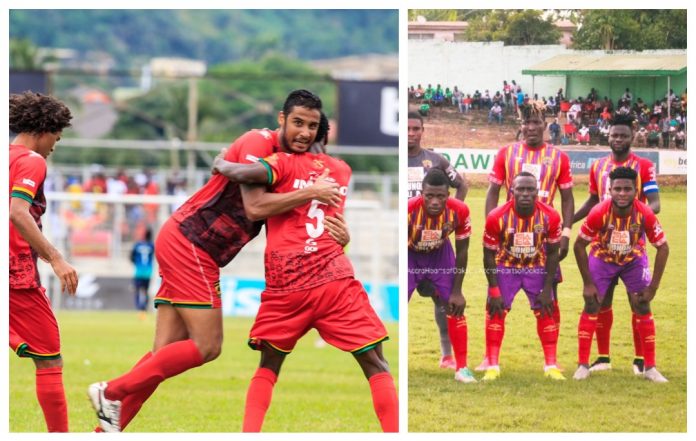 The Week 23 fixtures of the Ghana Premier League (GPL)  produced exciting results over the weekend.

As the race for the title becomes intense, all teams in the running are not giving room for bad results.

The first game for week 23 was at the Sogakope Red Bull Arena.

Great Olympics who have surprised many this season took the lead early in the game when Gladson Awako curled in a beautiful freekick.

The Accra-based side pushed for more in the second half and some great work from Samuel Abbey Quaye saw Konadu Yiadom put the ball in his own net to make it 2-0 to Olympics.

WAFA came back stronger and pulled one back through Enock Asubonteng before Justus Torutsey made it 2-2 in the 78th minute.

With the game heading towards a draw, a tame shot from Abdul Mudasiru scaled past goalkeeper Boadu to make it 3-2 for Great Olympics.

Dubbed the biggest game of the week, Dreams FC quickly announced their presence in Obuasi when Agyenim Boateng converted a spot-kick in the 38th minute to give his side the lead.

Dreams were pegged back after just a minute of going ahead when Brazilian striker Michael Vinicius headed in from close range.

Kotoko won a penalty in the second half under controversial circumstances but Ismail Ganiyu scored to make it 2-1.

Andy Kumi put the icing on the cake in the 78th minute when he connected with a pass from Mudasiru to make it 3-1.

Liberty Professionals who have been in top form of late halted Medeama’s excellent run as they held them to a 0-0 draw at the Red Bull Arena in Sogakope on Sunday.

An 18th-minute penalty from Diawusie Taylor gave Karela United the lead as they hosted Bechem United at the Cosby Awuah Memorial Park.

Bechem United fought back and got a much-deserved equalizer through Kofi Agbesimah on the 29th minute.

Karela had to wait till the 75th when forward Reginald Thompson scored the winner to make it 2-1.

Relegation threatened side Inter Allies managed to beat Elmina Sharks by 2-0 at the Theatre of Dreams in Dawu.

Two second-half goals from Samuel Armah and Andy Okpe were enough to give the struggling side all three points.

Referee Alpha Adey refused to continue the second 45 minutes after receiving all kinds of threats from the home fans and some officials of Ebusua Dwarfs.

David Sandan Abagna scored for Ashgold late in the first half but Abass Ganui struck late in added time to make it 1-1.

A 46th-minute strike from Benjamin Tweneboah was enough to hand Aduana Stars all three points against Berekum Chelsea.

Accra Hearts of Oak bounced back from last week’s defeat to beat struggling King Faisal 2-0 at the Accra Sports Stadium.

After a goalless first half where the Phobians missed some decent chances, Kojo Obeng Junior scored the opener in the 57th minute.

Hearts kept on pushing for a cushion and finally scored in the 88th minute after Ibrahim Salifu set up Afriyie Banieh who had an easy task of slotting the ball in an empty net.