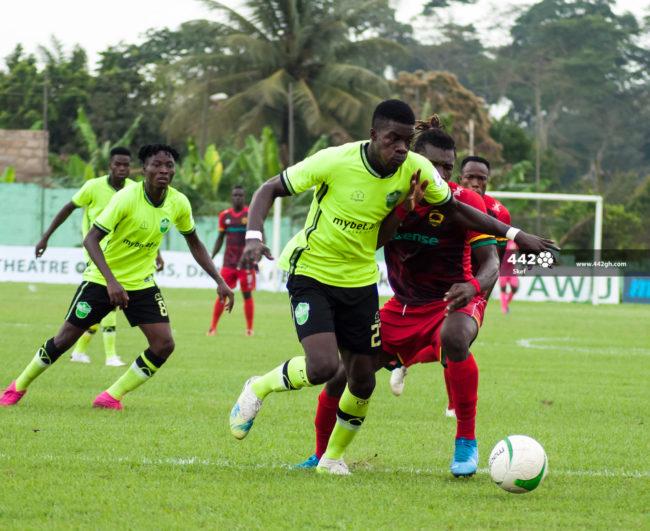 Another week of footballing action to look out for in the Ghana Premier League (GPL ).

Week 23 games in the GPL could have a massive impact on how the table will look by the end of the weekend.

Kumasi Asante Kotoko will have an opportunity to move top of the GPL league table when they host Dreams FC at the Obuasi Len Clay Stadium.

For Accra Hearts of Oak, it’s a chance for them to bounce back to winning ways after last week’s defeat. They will host relegation-threatened side, King Faisal, at the Accra Sports Stadium.

They will play host to 3rd placed Great Olympics at the Red Bull Arena in Sogakope on Friday, April 7, 2021.

Coach Annor Walker will approach this game with all the urgency it deserves as a win will aid them to climb to the summit of the league again.

The first leg of this encounter ended 1-0 in favour of Olympics.

Arguably the clash of the week, Kotoko will face off with Dreams FC at the Obuasi Len Clay Stadium on Saturday, April 8, 2021.

The Porcupine Warriors bounced back to winning ways with a slim 1-0 victory over Legon Cities last week.

Kotoko who have been tipped as one of the favourites for this year’s title lie 2nd on the table with 38 points, just one behind leaders Medeama.

Dreams have also climbed up the table after their 2-0 win over Hearts of Oak and currently occupy 4th with 34 points.

Kotoko narrowly won 1-0 in the first leg at Dawu and Coach Mariano Barreto’s side will need to up their game to snatch all three points.

Aduana’s poor start to the season has been a worry and last week’s defeat to a struggling Eleven Wonders was the icing on the cake.

Sitting in the 10th position they will need a win to ensure they move up the table.

For Berekum Chelsea 13th is not ideal for them and picking up a positive result in this regional derby will do them a lot of good.

AshantiGold have dominated the airwaves throughout the week after their French Coach Romain Folz departed without informing the club.

With assistant coach Thomas Duah expected to take charge of the team for this fixture, Eleven Wonders will also welcome Coach Ignatius Fosu back, he was asked to step aside for three games.

Eleven Wonders have lifted themselves out of the relegation zone with last week’s win over Aduana Stars.

Though this is a home game for Ebusua Dwarfs it will be played at the Nduom Sports Stadium for renovation works to be done at the Cape Coast Stadium.

The game which comes off on Sunday, April 9, 2021, presents an opportunity for both sides to change their respective positions this weekend.

Currently, 12th on the table, a win against a Legon Cities side struggling will move them up.

Legon Cities have not been able to free themselves from the relegation scrap and are 16th with only 23 points.

With just a single win in their last five games, pressure is building on Coach Bashir Hayford to turn things around

Bottom rocked side Inter Allies have only won four games all season and they will look to get the fifth when they play Elmina Sharks on Sunday, April 9, 2021, at Dawu.

Three defeats in their last three games have seen them cement the last position on the league log with just 16 points.

For Sharks, it’s a great time to play Inter Allies and after the 2-1 win over Ashgold last week, they will approach this with confidence.

Coach Nii Odartey Lamptey knows three points will lift his side from their current 12th position.

Karela after starting the league with real intent and purpose have taken their foot off the gas and currently occupy 6th with 34 points.

Back at their favourite CAM Park at Anyinase, playing a Bechem United side that is just a point behind them will be a cracker.

Sunday, April 9, will see both battle for supremacy as the first leg of this fixture ended 2-1 in favour of Chelsea.

Liberty were on a three-game unbeaten run since Silas Tetteh took over, but that was halted by Great Olympics last week.

League leaders Medeama SC will hope to continue their fine form and cement their position at the top.

A must-win game for both sides on Sunday, April 9, 2021, at the Accra Sports Stadium.

Hearts of Oak need the three points to continue their search for their first GPL trophy since 2009.

Pressure is mounting on coach Samuel Boadu after two games without a win, for King Faisal, it is about survival and a win will see them move out of the relegation zone.

The first leg ended 2-1 in favour of the Phobians.