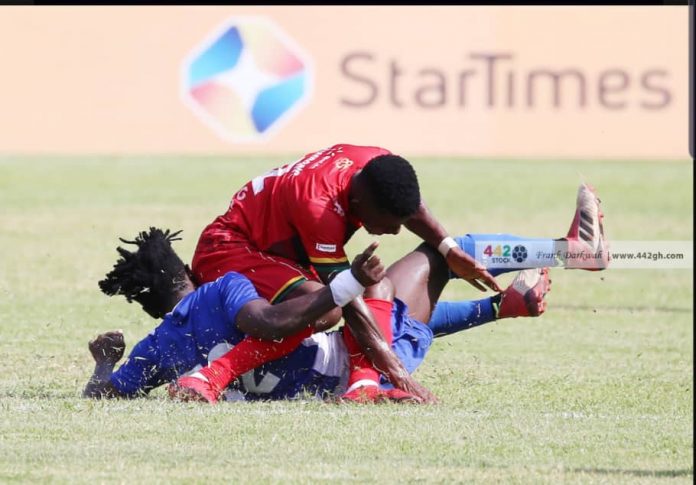 The weekend’s round of matches kicked off on Friday afternoon when Accra Great Olympics and Kumasi Asante Kotoko drew goaless in the capital. A dour first half dominated by Olympics livened up after the break with Kotoko seeing some good chances coming their way. The deadlock could not be broken and a point apiece was ultimately the reward for the two sides.

On Saturday, it appeared to be ending towards a goaless affair in Cape Coast where

With seconds remaining of second half injury time, Sharks pounced with a left foot drive from Samuel Ebow Arthur which dribbled past Wafa’s goalkeeper. 1 nil Sharks right at the death.

On Sunday, Eleven Wonders were pipped 1 nil by Liberty Professionals who continue positively with their tough task to avoid relegation.

In Takwa, talented Medeama midfielder Justice Blay made the weekend’s biggest headlines after he sustained a suspected broken leg in their match against Legon Cities.

The referee initially flashed a yellow at the offending player Joseph Adjei but showed him another card and sent him off soon afterwards.

The match ended 2-1 in  Medeama’s favour.

Bechem United smashed  4 goals unanswered against Aduana Stars in the most emphatic win of the weekend.

Berekum Chelsea came from a goal down to beat Ebusua Dwarfs 2-1 in a tight encounter.

In Dawu, only 55 out of 90 minutes minutes were played when Dreams FC hosted Karela United as  the game was rained off.

The two teams are expected to play out the remaining minutes of the second half on Monday.

The 6pm kick off in the capital was the last game of week 20, where Accra Hearts of Oak pipped relegation strugglers Inter Allies by a goal to nil.

That’s the wrap up of the GPL week 20 round of fixtures.

Stay with us for more on Max TV and StarTimes when we bring you Sports Daily and the GPL Headquarters later on Monday and throughout the week.