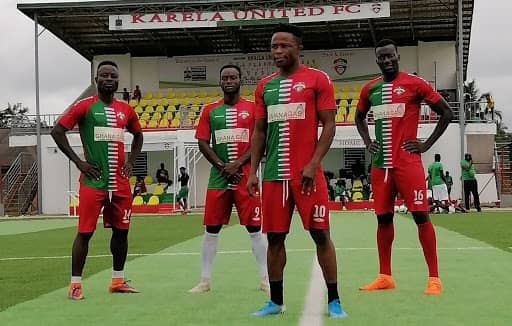 For a team who constantly dominated the league for a solid record of 10 weeks, it is safe to say Karela United have fallen short of the glory of the Premier league title.

This season started with Karela in the books of fans as potential winners of the highly coveted Premier league title.

Attaining that would imprint a golden record in the club’s history.

As a team with a bag of dreams and a formidable squad of vibrant youngsters, Karela United have been a squad causing an upset to the various teams in the league.

Ushered into the league in 2018, the boys from Anyinase have made an emphatic statement of their presence.

After that scare, they did a massive overhauling of their squad and added affable coach, Evans Adotey to their ranks.

That proved to be worth it as he led the team to top of the log for 10 straight weeks securing enough 3 points to keep opponents at bay. This lovestory seemed to be a promising one with a happy ending but gloomy days set in after the second round of the league went underway.

That dream unfortunately keeps dwindling with every match they play. The first round of the league really marked them out as a force to reckon with. They managed to turn the Crosby Awuah Memorial Park into a powerful fortress with their dominating performances. They registered only one loss at their fortress after a hard-fought battle with the Porcupine Warriors of Kotoko in match week 13.

Recording a 13 game unbeaten streak in the first round out of 17 games really boosted the morale and moxie of the Nzema Anyinase boys. Clearly, Evans Adotey was in the right trajectory to glory in the league.

Consistency in the Ghana Pemier league is one difficult hurdle to overcome but Karela proved by all standards that they were up for the task ahead.

The second round of the league kickstarted on the 2nd of April and the Passioners played their first game against Ashanti Gold on the 4th.

The game ended in a stalemate and luckily so, due to a late strike from midfielder Umar Bashiru to strike out Osei’s earlier kick in the 38th minute. That tie was the beginning of Karela’s systematic slump which sees them momentarily languishing outside the top four.

After the game with the miners, they surprisingly lost against relegation-bound-Inter Allies.

Huge let off? Well that victory was the greatest highlight of Match week 19 as Karela was thrown into the threshold of the woods. Coming out was still far from being realized as they continued falling short. They went on to Dawu and had their dreams of climbing back atop of the league log shattered at the Theatre of Dreams.

Another loss in the books of Adotey’s men after trailing by a lone goal to The Still believe boys.

In their next game against Hearts of Oak, the Passioners were hoping to salvage their woeful record of winless games and gear back on the winning trail. Well their ship kept sinking after they recorded another stalemate at home against the Phobians.

A game Coach Evans described as an unfortunate turn of events as his men were the better side. Weariness and anxiety had then become a palpable aura in the camp of Karela. At this point they had drop vital points to go back on top as Medeama, one of the title favorites drudged Kotoko to lead the title race. Karela incidentally, had to settle for the 5th spot with 33 points in match week 21.

Hope was definitely not lost by Evans Adotey since the gap between Medeama-league leaders and his team was just 2 points.

This showed how heated the title race was and how teams were not willing to slip at any chance.

Losing two consecutive game could cut the hopes of any team at all for a spot in the top four race. Karela’s frustrating results was still not getting better after drawing away from home to another relegation bound team-King Faisal. For the fans, one can only imagine how despondent they feel at the moment. Everything seem to be against the Anyinase guys as they keep waning in form and style.

The sort of urgency and attacking football we witnessed Karela play in the first round of the game has transformed into conservative football with no drive upfront.

Diawusie Taylor has simply been out marked in all games so far. He has failed to register a single goal since the beginning of the first round and that is a complete stark difference to the Taylor we saw from the first round.

It seems the onus has fallen on Max Boakye to bag the goals instead yet even with that, it is still not a strong anchor to hold the Karela ship afloat.

Playing against, Ashanti Gold, Hearts of Oak and Dreams was obviously going to be a tough string of matches but with the name Karela had carved out for themselves, their performances were really below the radar. It is like they have fallen victim to the eminence they created in the first round and maybe just maybe titbits of the Karela who were headed into relegation during last season’s truncated league is beginning to manifest.

That pill however is very hard to swallow considering the experience coach Adotey exudes in the team.

The prominent highlight of their poor output was that against the relegation-threatened teams. These were easy fixtures they should’ve secured all maximum points yet they failed at it miserably. They have been outclassed by their opponents in all the four games played so far. It was distressing to see the once valiant title contending team failing to register back-to-back wins like before. The problem at Karela needs immediate salvaging and soon.

The second round has taken a tempestuous turn of events and every team is fighting their way to the top. Evans Adotey needs that first round syndrome to return to winning ways once again.

If they keep registering loses and draws they might fall deeper into the danger zone of the league log and that will spark diffidence in the team.
They’ve conceded 6 goals in 5 matches and scored 3 goals. This goes to prove their defense look porous despite the conservative football their opponents force out them so far. It has to do with finding the rhythm and moxie upfront. The goaless streak of Taylor resounds how blunt the Karela forward line has become.

The partnership between the midfield and the frontliners needs more filing and moulding. The road to winning a Ghana Premier league title deals with mighty brawns and sharp brains, eminence and fortitude and most importantly teamwork and cohesion. If Karela still wants to nurse the dream of winning the title, then they need to infuse these attributes back into the team. Teams after the first round, have done their homework and realigned their principles and game plans. All coaches have studied their style of play and seem to have cracked the “Adotey code”. He needs to step-up with a different gamebook to shoot his team back on top of the league log.
Karela face Bechem United in match week 22. Bechem United have recorded 2 wins and 3 loses in their last 5 games and are currently 7th on the table with 33 points.

They are one point below sixth-place-Karela United and would definitely go to Anyinase with everything to play for. This game will be a tough one for the Passioners but the hunters are prowling around for a chance to pounce on Karela and snatch the maximum 3 points en route to the top of the table.

The going is really getting tougher by the minute but will Evans Adotey pull a fast stunt and inject a fierce breath of winning mentality into his team or they’ll continue their disturbing slump? There is only one way to find out, and that is to watch them keenly as the league unfolds.