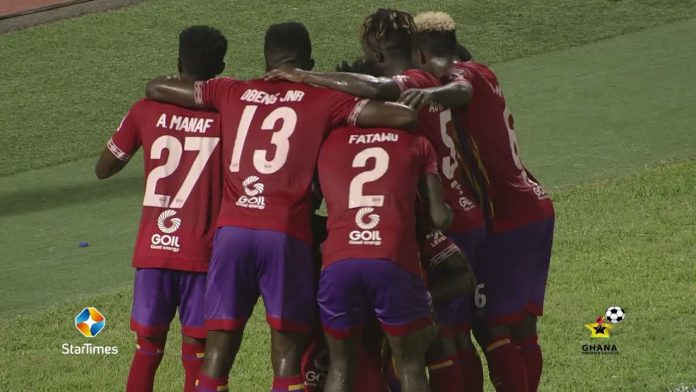 On Sunday evening at the Accra Sports Stadium, Accra Hearts of Oak put up an impressive performance to defeat Aduana Stars 2-0 in the Ghana Premier League (GPL).

In a matchday 18 encounter of the 2020/21 Ghanaian top-flight GPL  campaign, the Phobians locked horns with the team from Dormaa.

The head coach of the Accra Hearts of Oak, Samuel Boadu, knowing that a win will provide the needed boost to challenge for the GPL league title at the end of the season, named a strong starting eleven with a blend of experience to do battle for his team.

They were awarded a penalty kick in the 30th minute, with his players putting up a good performance in the first half.

Striker Victor Aidoo, who took on the responsibility, expertly scored from the spot to shoot the home team into the lead.

Aduana Stars could not equalize, despite their efforts to draw, as Ibrahim Salifu scored to seal a huge 2-0 win for the home team in added time.

The win moves Hearts of Oak to third on the league table with Aduana Stars dropping to 9th.