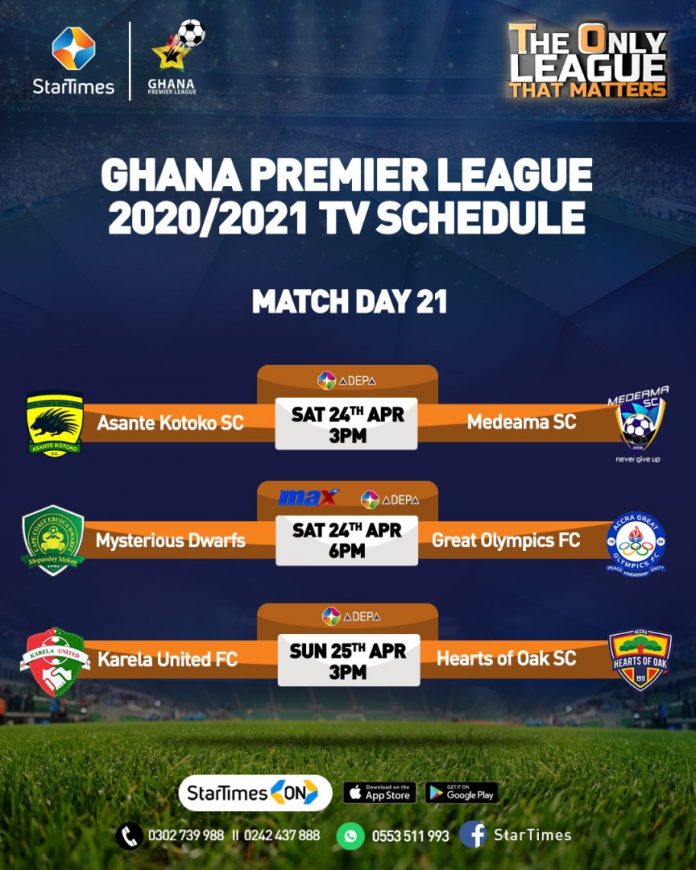 Another weekend of potentially dramatic and explosive matches beckons in the Ghana Premier League (GPL) .

Wherever one looks, points will be fiercely contested; whether to augment top spot, secure mid table cushioning or to climb out of the relegation pit.

Neutrals would love to witness the bottom of the table clash between Inter Allies and King Faisal, top of the table affair when Kotoko and Medeama clash, as well as slowly fading Karela United versus Accra Hearts of Oak.

Both teams were in indifferent form when the first round encounter ended 1-1 at the Akoon Park.

This time around, Kotoko will come into the game on the back of an unbeaten streak under Portuguese trainer Mariano Barretto

On 35 points, the Kotoko coach will be aiming for a win to cement his side’s position at the summit of the GPL.

Brazilian talisman Fabio Gama is available for selection and that in itself offers a huge boost for the Porcupine Warriors.

Medeama would be equally confident having also won three, drawn one and only with one defeat in their last five matches.

Coach Yaw Preko would urge his wards to put behind the horror tackle that ended the season of key Medeama player Justice Blay with a win.

Great Olympics have been the biggest surprise in the ongoing Ghana Premier League with some mouthwatering  football.

Can they once again turn on the style with a big performance and three big points?

Coach Annor Walker’s boys travel to Cape Coast where 13th placed Ebusua Dwarfs lie in wait to take them out.

Dwarfs drew 1-1 in the first leg at the Accra Sports Stadium and may have an antidote for the attacking threat spearheaded by captain Gladson Awako.

Liberty Professionals are in dire straits and will play host to Berekum Chelsea with the knowledge that only a win can rekindke their fast fading GPL status.

A change of venue from Dansoman to Sogakope is aimed at a change of fortune. But whether or not the Scientific Soccer lads will come good with all three points will depend on the mood of their opponents from Berekum.

A win for Liberty could see them move up to 14th on the league table above Legon Cities and Eleven Wonders.

Berekum Chelsea lie 9th on the ladder and securing the maximum points will only strengthen their push for a top-four finish.

Wafa will be fully aware that the first round win over Wonders was a slim 1-0 affair when both sides failed to sparkle.

Similar topsy-turvy form and results points to another tight affair in the Volta region.

WAFA are 12th on the table with 26 points but have lost two of their last five matches in the GPL.

Coach Ignatius Fosu will be reminded that hus side have only tasted victory once in their last five matches.

14th on the league table with just 22 points is dangerously too close to Liberty Professionals who are 16th and one point behind in the relegation zone.

They are the current Ghana Premier League champions but Aduana Stars have had a torrid start to the current season.

Currently in 10th position with 27 points, Aduana are not in their usual bullish mood.

Unlike Sharks who have won three of their four matches under new head coach Nii Odartey Lamptey.

Currently 11th on the table with 26 points, Sharks would want to continue their impressive form with a repeat of their first round 1-0 win over Aduana.

Ashgold are unbeaten under new French trainer Romain Folz who is keen on securing the maximum points at home.

The black and gold miners last victory came against Accra Hearts of Oak under controversial circumstances but they have been playing good football.

This bottom of the table clash is mouthwatering for several reasons. It has been dubbed a six pointer and has generated a lot of excitement.

A fierce contest is on the cards as both sides know the importance of getting three priceless points.

With just one win in their previous five matches, the statistics does not favour any of these two relegation haunted sides.

Inter Allies are rock bottom of the GPL with 16 points and King Faisal are just a place above them with 19 points.

The survival of both teams into next year’s GPL season may well rest on this tantalising clash.

The game will come off on Sunday, April 25th at the Theatre of Dreams in Dawu where the new home of Inter Allies has so far brought good returns.

When both sides met in the first round, it ended in a nil-nil draw and at the time, seen as a good point by Cities.

Since then, Dreams FC have announced the departure of their top marksman Joseph Esso to MC Alger in Algeria.

Coach Bashiru Hayford’s side are showing signs of resilience especially in their win over Great Olympics a fortnight earlier.

Cities currently lie 15th with 22 points, just a single point above 16th placed Liberty Professionals. It’s that tight down there.

This is expected to be a fascinating encounter with Karela daring Hearts of Oak at the Cosby Awuah Memorial Park on Sunday, April 25, 2021.

It’s a straight clash between 4th placed Hearts and 5th placed Karela as they are only separated by one point.

Hearts of Oak will go into the game the more confident of the two sides as they have won three of their last five games, drawing one and losing one.

Karela who started the league with real vigour have picked up only one win in their last five games, losing as many as three matches.

Hearts coach Samuel Boadu and his opposite number Evans Adotey of Karela both know a win will boost their chances of winning one of the most open GPL title races in recent years.

A tight 2-1 comeback win for Karela most likely on the cards.