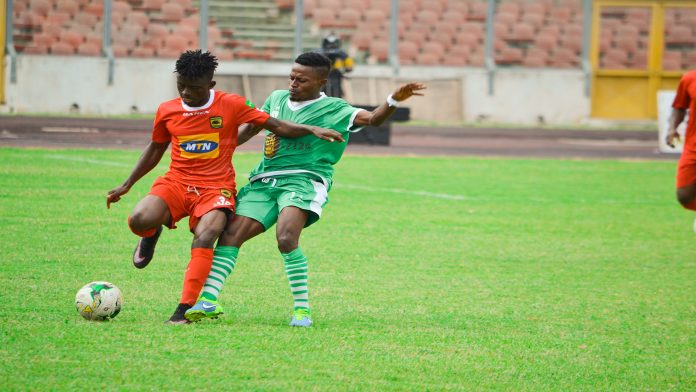 Kumasi Asante Kotoko has lost their first game on the road this season in the Ghana Premier League (GPL) against struggling Elmina Sharks at the Paa Kwasi Nduom Stadium.

Haven been stricken by injury worries, Asante Kotoko rang changes to their squad as Wahab Adams and Mudasiru Salifu were handed starts.

Starting brightly, the game offered both teams chances to have opened the scores of the game but the opportunities that came their way were wasted.

After beating the Sharks goalkeeper, Kwame Opoku shot goalwards but his goal bound effort was cleared off the line by his defense.

Elmina Sharks had all the chances, but however wasted them and had about three penalty appeals waved away by the center referee.

In the second half, they made their dominance count as Alhaji Mustapha ghosted past left back Imoro Ibrahim before slotting home in the 55th minute to open the scores.

The porcupine warriors were persistent on having an elusive equalizer which never arrived as they wasted opportunities which came their way.

It was the first game for Nii Odartey Lamptey, former Ghana and Kotoko player, who was appointed interim coach of the club last week after Sharks dissolved their technical team.