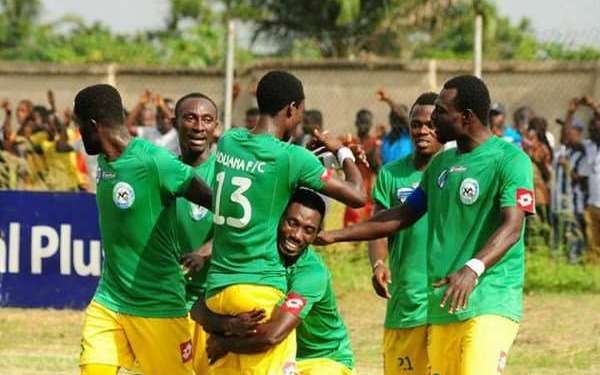 The matchday one game which was postponed due to Covid-19 reasons came off in a spectacular fashion.

Prior to the game, Aduana’s talisman, Yahaya Mohammed had promised to silence the Phobians and the bulky striker walked the talk.

It took him 43 minutes to put his name on the score sheet and that takes his tally to 3 goals in 3 games so far.

Hearts of Oak were a bit disorganised but managed to see out the first half without conceding again.

The second half started in some fine fashion for Aduana who scored just a minute after the recess.

A corner was floated in but the Hearts defence cleared their lines only for the ball to fall kindly to Prince Acquah of Aduana who hit about a thirty-yard shot which beat Hearts of Oak’s goalkeeper Richard Attah and that made it 2-0.

The Phobians came out of their shells trying to reduce the deficit but the Dormaa based side was resolute and stood their grounds.

The win takes Aduana to 7th on the table and Hearts have dropped to 8th.