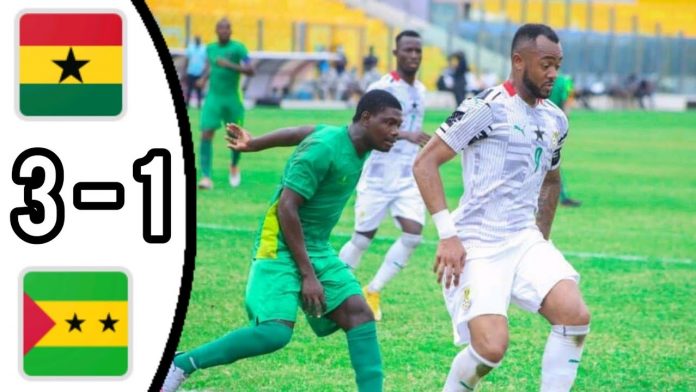 In the last Group C qualifier played at the Accra Sports Stadium, the Black Stars crowned their 2021 AFCON qualifying journey with a 3-1 victory over Sao Tome and Principe.

It victory came 72 hours after the Black Stars booked their AFCON 2021 qualification in a 1-1 drawn game with South Africa’s Bafana Bafana.

Goals from Nicholas Opoku, Jordan Ayew, and Baba Rahman were enough to see the Black Stars stay on top of the group, which was a formality.

With a 12 minutes’ header from a corner kick, defender Nicholas Opoku opened the scores.

Looking for more goals to confirm their superiority in the group further, the Black Stars marshaled more men upfront with Captain Andre Ayew moving deep into midfield to allow Thomas Partey to move further up.

On the other hand, Jordan Ayew moved onto the left flank to create space for Wakaso and Kudus to determine the pace of the game.

Despite the Santomeans making a few incursions into the Ghanaian defence, Ismail Ganiu and Nicholas Opoku were quick to destroy any threat.

The Black Stars, with a packed defence, needed the individual brilliance of Captain Andre Ayew to break the back of their back, in the 29th minute the captain received a pass from Thomas Partey around the centre circle, dribbled his way pass a host of legs before serving Jordan Ayew who was fouled in the box for referee to award the Ghanaians a penalty.

Jordan Stepped up to slot in to the blind side of Goalkeeper Almeida Alder in the 30th minute of the first half.

To prevent the Black Stars from scoring again to take the game to a first half end, the Santomeans kept their back line tight

However, Coach Akonnor introduced Gladson Awako into the game for Osman Bukari, a tactic that saqw more ball playing midfielders in the side.

Baba Rahman, with Awako moving deep into midfield, was allowed space to run the lines to catch the back of the opponents.

It took the Black Stars 15 minutes to break the back of the net from a Jordan Ayew shot corner to Awako who served Andre Ayew whose cross ball into the goal area found Baba Rahman whose volley ended at the Back of the Net.

The Black Stars seemed to enjoy play after the third goal, bus some amount of complacency at the back between goalkeeper Razak Abalora, Ismail Ganiu, and Imoro Ibrahim left Joceleay Carvalho picked a miss kick from Abalora to shoot straight into the net for a well-deserved consolation goal.