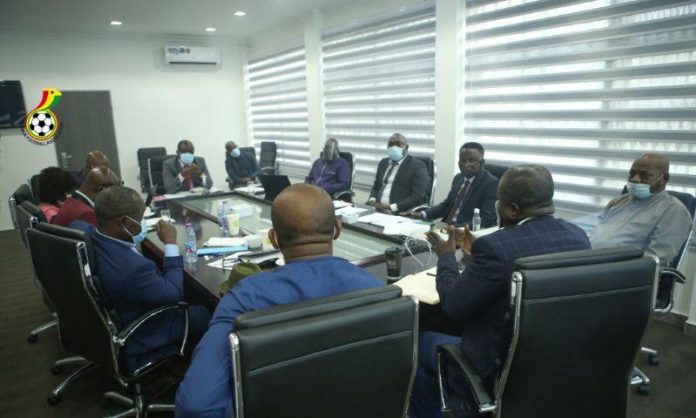 The Executive Council of the Ghana Football Association (GFA), at its Emergency Meeting held on Wednesday, July 7, 2021 on hooliganism in our football, especially, the unfortunate incidents of violence that took place during last Sunday’s Division One League match between Brong Ahafo United FC and Real Tamale United FC at Sunyani Coronation Park, makes the following statements and directives:

1. That while taking due cognisant of the fact that the Division One League Board (the body mandated to manage the second-tier competition) issued a statement earlier condemning in no uncertain terms the unfortunate violent incidents, the Executive Council also wishes to condemn without any reservations, the criminal conduct, assault and public disorder and the violations of the GFA Match day Protocols (Number of spectators admitted, lack of social distancing, etc) that took place at the Sunyani Coronation Park.

2. That while taking due cognisant of the fact that the Division One League Board (the body mandated to manage the second-tier competition) issued a statement earlier condemning in no uncertain terms the unfortunate violent incidents, the Executive Council also wishes to condemn without any reservations, the criminal conduct, assault and public disorder and the violations of the GFA Match day Protocols (Number of spectators admitted, lack of social distancing, etc) that took place at the Sunyani Coronation Park.

3. That the Executive Council would like to place on record that the GFA has submitted footage of the unfortunate incident to the Ghana Police in Sunyani to assist them investigate and to effect the necessary arrest and prosecution of all persons identified in the footage who were engaged in the criminal assault of the match officials, destroying property and dragging the game in the mud. The GFA is urging members of the general public with any video which may be useful to the Ghana Police Service to kindly submit same to the Association or the Police.

4. That the Executive Council as a matter of urgency has requested for a meeting with the Inspector General of Police (IGP) and the hierarchy of the Ghana Police Service to find a lasting solution to these incidents at match centres.

5. That the public is hereby informed that referee Maxwell Hanson and the Assistant referees are doing well after receiving medical treatment at the 37 Military hospital in Accra.

6.That on the issue of sporting misconduct, the GFA Prosecutor is tasked to expedite action by preferring the requisite charges concerning the breaches of the provisions of Division One League Regulations, GFA Disciplinary Code and the approved GFA Match day Protocols to the perpetrators.

7. That the Disciplinary Committee has been tasked to sit on this matter expeditiously. The Executive Council further urges the judicial bodies of the GFA to fast track the adjudicating process of all cases before them as the season winds up.

8. That in the exercise of its powers under the Division One League Regulations, the Executive Council has decided that Brong Ahafo United FC is temporary banned from using the Sunyani Coronation Park as its home venue.

9. That all the 16 clubs in Division One League Zone 1 are hereby directed to play their remaining league matches of the season behind closed doors without failure and that any violation shall be severely punished. Only Ten (10) Management Members of the Home Team and Ten (10) Management Members for Away clubs shall be granted access as well as Twenty (20) media persons (to be accredited by the GFA). No other person shall be in attendance apart from the 18 players and the 7 Technical Team members from each club, Match Officials, Medical Personnel for the match, 8 ball boys and the agreed number of Police and Military officers sanctioned by the GFA. This shall strictly be enforced.

10. That the Home Team is reminded of their responsibility under the Division One League Regulations to arrange and pay for effective security for their home matches.

11. That severe sanction shall be preferred should there be any further violations of the GFA Match day Protocols by any club.

12. That all other clubs in the country are to take note and comply strictly with the GFA COVID-19 Match day Protocols.

13. That club officials, players, coaches and supporters are being reminded to be mindful of their utterances, actions and conduct at match venues as a special monitoring team will be put in place to check infractions in the remaining matches.

14. The GFA wishes to sound a note of caution to all players, coaches, attendees of matches and stakeholders that the Association will not hesitate to take action(s) to ensure strict adherence to its Regulations, Disciplinary Code and the national COVID-19 Protocols as well as its approved GFA Match day Protocols.

15. The GFA wishes to assure all Ghanaians that the Association will continue to support the Ghana Police Service and the national fight against the COVID-19 pandemic. The Association is urging all clubs to continue with the education of all their supporters and the public on the right behaviour expected of a good football fan and compliance with the GFA COVID-19 protocols.