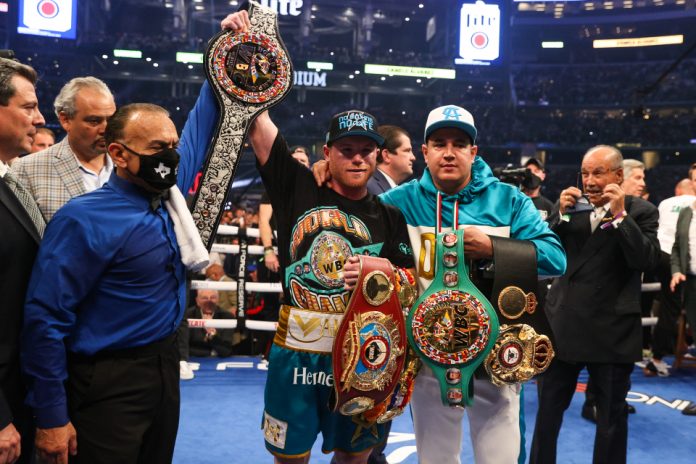 The fight began with an intriguing opening round as Saunders utilized a number of jabs while Canelo successfully targeted the body.

Saunders was responding well until round 8 when he was caught with a big counter right uppercut from Canelo.

Canelo pursued his opponent around the ring and landed big shots yet the Brit survived the round.

It was clear that there was a serious problem with the Brit’s eye, the extent of the injury made Saunders corner and his team threw in the towel to stop the fight. Crowning Canelo as the unified WBA, WBC & WBO super-middleweight world champion and also being the first boxer to cause Saunders to taste his first defeat in his boxing career.

Reports has it that Saunders was rushed to the hospital after suffering a suspected fractured eye socket in Canelo’s defeat.

Canelo had this to say after the fight.
“I think I broke his cheek and I knew he wasn’t gonna come back out…
He added: “Caleb Plant, for the belt. I’m coming man, I’m coming my friend. I hope we can give the fans that fight.”

Canelo means business after calling out Caleb Plant who is currently the IBF super-middleweight champion. The Mexican has 3 of the 4 major world titles and now wants the IBF belt from Caleb Plant.