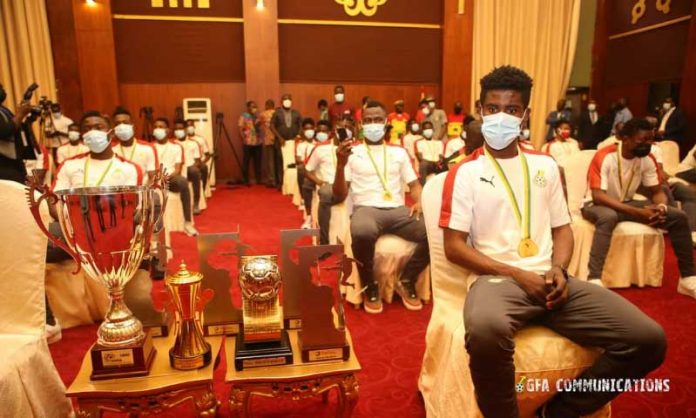 President Nana Addo-Dankwa Akufo-Addo has revealed that a $10,000 reward package will be given to each member of the national U-20 team for winning the recently ended Africa Youth Championship in Mauritania.

However, President Akufo-Addo was quick to add that half of the money to the players will be in cash while the remaining half will be put into an investment for the players.

The announcement was made by President Akufo-Addo when the team paid a courtesy call on him and to present the trophy they won to him at the seat of government on Tuesday, 3rd March 2021.

Acknowledging the role of the technical team, the President also announced that the coaches will each receive $5,000 for the efforts in helping Ghana clinch the title.

Announcing the package, Nana Addo said “We have a package for you which I am sure the GFA President, Sports Minister and your team leaders talked to you about. This is a token but it should help you receive the gratitude of the nation. It is also to tell you how happy Ghanaians are at what you have done. Each one of the team members will get $10,000 from the government, the rest of everyone will be receiving $5 as an expression of appreciation. The decision has been made that the money half of it will be in cash and the other put in investment over the next 10 years.”

The President also made personal a donation of $5,000 to Issahaku, Danlad, Afriyie Barnieh and head Coach Zito for winning individual laurels at the tournament.

Ghana’s U-20 side emerged as the champions of the just ended 2021 Africa Cup of Nations hosted in Mauritania.

The Black Satellites defeated Uganda 2-0 in the finals tournament on Saturday.

The win means, the Black Satellites have won the Youth Championship four times.