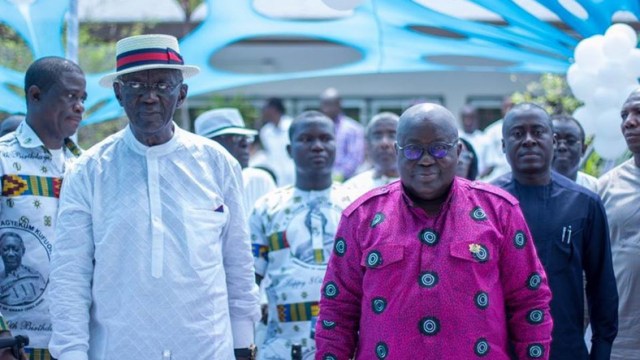 Mr. John Agyekum Kufuor said a vote for a leader without a vision will make Ghana retrogress.

Speaking at the final rally organised by the New Patriotic Party (NPP) at Mantse Agbonaa on Saturday, December 5, 2020, former President Agyekum Kufuor stated that although President Akufo-Addo was heavily criticised for the number of ministers he has appointed, he has delivered a leadership that has transformed lives.

He said President Nana Addo Dankwa Akufo-Addo has led a leadership that has helped implement the free Senior High School policy and other social intervention policies.

Contrary to claims that the NPP is a capitalist party, the former President indicated that a vote for former President John Dramani Mahama and the National Democratic Congress (NDC) will retrogress the country.

He insisted the that President has used his first term to do a lot for Ghanaians and must be voted for.

Mr Kufuor told the charged crowd that the policies of the NPP are far superior to that of the NDC.

He disclosed that from the information he has gathered, President Akufo-Addo will win the presidential election by a one-touch victory and get a majority of 170 seats in the next Parliament.

This prediction, he added, is based on science and surveys conducted by the party.

He ended by appealing to Ghanaians to retain President Akufo-Addo so they will not regret it.