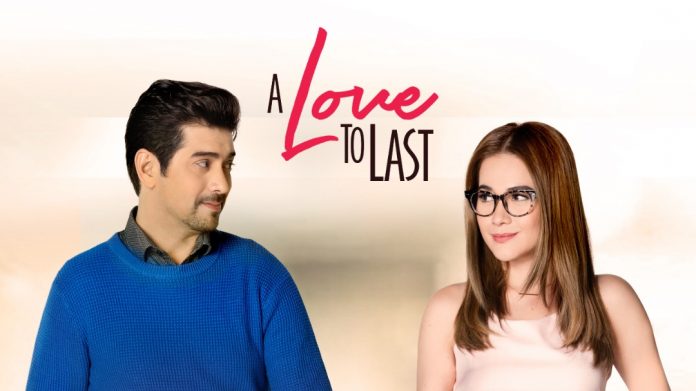 We start the episode for tonight with Grace walking out to see Andeng and Michael. Andeng excused herself while Grace asked Michael to leave. Michael tried to tell her that telling Lucas about their relationship was the best thing to do but Grace told him that they already broke up. Michael would not go so Grace agreed to meet up with him later so that they could talk.

When Andeng went inside, Lucas asked her where Grace was. Andeng told him that she went to a store to buy something and Lucas wanted to follow. Andeng stopped him and said that he had to attend the meeting that they were holding in a while.

Grace came back when the meeting was ongoing and Lucas asked her where she’d been. Grace said that she had to call her secretary. Andeng found Grace later in the ladies’ room and asked if she was okay. Grace said she was doing fine and Andeng suggested that she tell her children about Michael so that she would no longer have to keep it a secret. Grace lashed out and said that she would never hurt her children again and there was nothing to tell since she and Michael already broke up. She added that she was willing to sacrifice her own happiness for the sake of her children.

At the double date with Gena and Chloe, the burgers were served for Fort and Tupe to have their eating contest. Tupe easily cleared his plate but Fort had a hard time and ended up getting sick. Chloe told him to stop and took him home since he was not feeling well. When they arrived at his house, Fort’s parents were fighting over an affair that his father had so she told Chloe to leave. Fort’s parents were surprised to see Fort with Chloe and she told them that she brought him home because he was sick.

Gena was upset with what Tupe did to Fort and told him to admit that he challenged Fort to prove that he was a better man for Chloe. Tupe would not admit it but Gena forced him to say that he liked Chloe and was jealous of her relationship with Fort. Tupe said he was jealous, making Gena more upset. She got into her van and went home.

Chloe asked Lucas later how the preparation for his album launch was going and she said it was weird because Grace and Andeng were working together. He said that it was like Grace was trying to make him accept Andeng. Chloe was happy to hear it and called Grace to thank her for the effort she was making with helping Lucas move on. She also tried to call Fort to thank him for pushing her to talk to her parents but he did not answer her call. She decided to send a message instead.

Kitty showed the drawing she made to Anton and said that she wanted to show it to Andeng. Anton took her to Andeng’s house and Kitty was delighted to show her the drawing. She gave it to Andeng and offered to teach her how to draw. She also asked if Andeng would join her and Grace for their next outing and Andeng said she would.

Anton took Kitty home and sent some tea to Andeng to help her work because she had to work late to prepare for Lucas’ album launch. They had a long conversation on the phone about the number of kids they wanted to have and Anton played a song on the piano for Andeng.

In the morning, he brought her sandwiches for breakfast. He said that he wanted to make it up to her because they would not be able to get married in a month like they wanted. Andeng said it was fine since she already knew they had to postpone their wedding when they decided to wait until everyone they cared about accepted their relationship.

Grace took Lucas to the venue for his album launch while Anton went with Chloe. Chloe kept trying to call Fort but her calls never went through and she began to worry.

The event started off well since a lot of people came and Lucas gave a splendid performance for their opening track. He however dedicated it to Anton and Grace and Andeng wasn’t comfortable about it so she went outside to get some air. Anton went outside to check on her and Andeng said she was fine.

Grace would not answer Michael’s phone calls so he decided to go to the album launch. Lucas was headed to the bathroom when Michael stopped him and introduced himself. Grace rushed over to stop him but Michael had already told Lucas that he was Grace’s boyfriend. Anton and Andeng went in and Anton asked what was happening Lucas told him that the man said he was Grace’s boyfriend. Michael asked Grace to admit it but Grace told him to leave. She pushed him out of the venue and Anton tried to console Lucas. Andeng took them to the back room for some privacy and Lucas said that he wanted to be alone. Chloe said she would stay with him so Anton and Andeng went outside.

Andeng told Anton that she already knew about Michael but did not mention anything because it was not her place to tell him. Anton said that he already heard about Grace seeing someone from her sister.

Grace was mad at Michael for what he had done and threw him out of the venue. She went back in and blamed Andeng, accusing her of setting everything up so that Lucas would find out about Michael. That was where today’s episode ended…